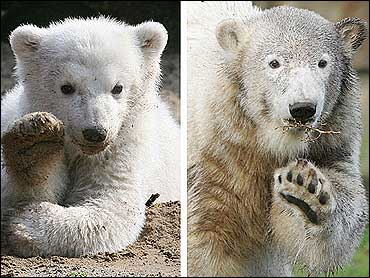 The Berlin Zoo's famous polar bear Knut, who was rejected by his mother but went on to win the hearts of millions around the world, celebrated his first birthday Wednesday with more than 2,000 well-wishers.

But Knut - no longer a tiny cub, thanks partly to his penchant for croissants - probably didn't get a taste of his own giant birthday cake, made with 300 eggs and 22 pounds of marzipan. He now tips the scales at more than 240 pounds and has been on a diet since July.

His special treat, instead, was a healthier concoction of fresh fruit, vegetables and rice - topped with a toy wooden candle.

The Berlin Zoo pulled out all the stops to fete its star attraction, who has gone from a fluffy white powderpuff of a cub to a full-grown polar bear with a cheeky curiosity and a penchant for muddying his coat by rolling in the dirt.

Children were given free entry to the zoo, and proceeds from sales of slices of the huge cake will go toward the zoo's foundation, officials said.

"He's so dirty! They should have given him a bath," said 5-year-old Leni Schmidt, who came with her mother and a friend to join the party.

The zoo estimated that some 2,000 people had visited the birthday bear by noon and a steady stream were still heading toward his pen, despite the cool weather and overcast skies.

Yet Knut himself seemed more interested in playing with his toy candle and licking the crumbs from the platter that bore his birthday treat than with the crowd.

The zoo said the Knut craze has generated up to $14 million over the past year through ticket sales that have more than doubled and the licensing of Knut toys, books and other trinkets.

Knut was abandoned at birth, along with his twin brother, who only survived a couple of days. CBS News correspondent Richard Roth reports that some critics even claimed that his rescue by zoo keepers was a violation of nature's laws and that Knut too, should have been left to die.

By the time Knut was a 3-month-old white fur ball, with button eyes and his own fan club, he had been photographed for the cover of Vanity Fair - and attracted hundreds of thousands to the zoo.

Now that he is grown, zoo officials say they do not have room to keep him permanently and are considering other offers from zoos in Europe, with an eye to finding him a mate.

Thomas Doerflein, who raised Knut by hand, playing with him and feeding him from a bottle, was quoted Wednesday by Germany's mass-circulation Bild newspaper on Wednesday, as saying he hoped the bear would soon find a new home in another zoo.

"A spacious enclosure. A female partner. At some point, Knut needs to leave me," Doerflein was quoted as saying.