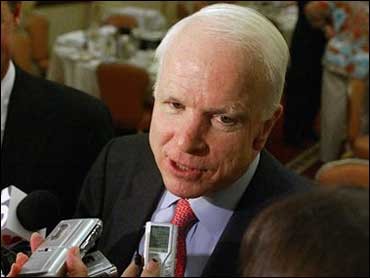 Queen Elizabeth II and most of her nearest and dearest gathered Wednesday for a night of partying to celebrate a slew of royal birthdays. But the birthday boy himself wasn't there

The royal mega-party at Windsor Castle was to celebrate five royal milestones in the year 2000, including the queen's sister, Princess Margaret's 70th, her daughter Princess Anne's 50th, and her son Prince Andrew's 40th.

But foremost among the celebrations were the 100th birthday, on Aug. 4, of the Queen Mother Elizabeth, whose enduring popularity has been a bulwark of the British monarchy, and William's coming of age on June 21.

It was actually more than just a royal birthday for the young prince, reports CBS News Correspondent Mark Phillips. It was something of a royal coming out.

As he turns 18, Prince William left the protective cocoon which kept the press out of his hair. But while this is now open season on Prince William, he's still something of an endangered species.

The party for William Arthur Philip Louis Windsor began a week before with the release of pictures shot during his recent time at the exclusive Eton School. They show a sometimes studious, sometimes athletic, sometimes domestic young man.

The fuss surrounding the young prince is understandable, considering that he is Princess Diana's son and second in line to the British throne. But he's also known as "His Royal Hunkness" to many young girls.

And another, "He's cute. I like him. He's got the shy look. I like that. And what else can I say? Every girl in London is after him. I'm not going to get a chance."

In case anyone's worried, William will have his own birthday party once his exams are over. It will be a quiet affair for a few hundred of his friends and family, and the adults will retire at midnight so the young ones can boogie.

British constitutional historian David Starkey tells CBS News Early Show Anchor Bryant Gumbel that Prince William is going to have to pass through many of life's experiences in the public eye, and that might include the first time he puts his arm around a girl or the first time he gets drunk in public.

"For any young man, these are difficult moments," explains Starkey. "For somebody doing it in front of two billion people, it's terrifying."

"Celebrities are the same the world over," observes Starkey. "We worship them, and, yet, we want to knock them down, and I'm afraid that's the name of the game."

In any case, the young prince seems to have a healthy relationship with his fathr.

"I think the idea that…he was his mother's boy and disliked his father has always been nonsense," says Starkey. "I mean, Charles has shown himself to be an understanding parent."

As far as his father's relationship with Camilla Parker Bowles is concerned, Starkey speculates that it matters far less to William than outsiders might guess.

"I think he comes from the background where the sort of relationship that his father has had with different women isn't...anything very unusual," he says. "I imagine half of his classmates at Eton have the same sort of complicated family life. He'll learn to live with it."

By birth, he is a king-in-waiting. But he's still third in line, behind his grandmother Queen Elizabeth and his father Prince Charles.

"It's a difficult thing to do," says Starkey. "Frankly, all you have to do is to wait for the death of those that you love most. It's not really, perhaps, very satisfactory. I think he'll be young enough and outgoing enough. He has, after all, decided to do something unique in the royal family, which is study art history at university. He's his own man."