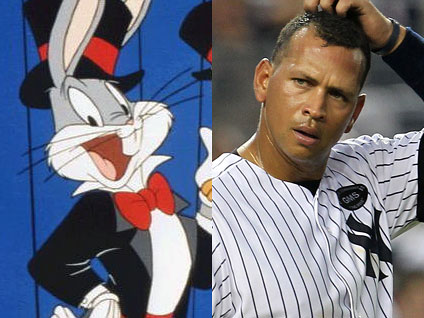 NEW YORK (CBS) What's up, Doc? Two big celebrity birthdays - one fictional, and one in the sports world.

Tuesday marks the birthday of beloved cartoon character Bugs Bunny. If he had a cake to mark the occasion, it would have 70 candles on it (and would probably be a carrot cake).

Bugs made his debut in the animated short film "A Wild Hare" on July 27, 1940. It's in that film that he first pops out of his rabbit hole and asks Elmer Fudd in what has become his signature line - "Eh, what's up, Doc?"

Though a rabbit resembling Bugs appeared in cartoons as early as 1938, animation historians consider "A Wild Hare" to be the first "official" Bugs Bunny short.

Outside the Looney Tunes realm, one of baseball's biggest stars is also celebrating his birthday -- Alex Rodriguez, the third baseman for the New York Yankees, turns 34 today. He won't be celebrating in New York tonight, though - the Yankees are playing in Cleveland against the Indians.