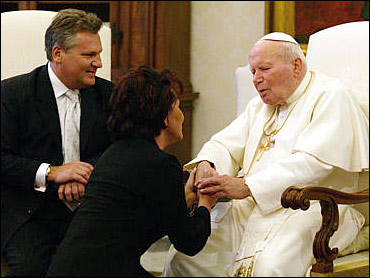 Pope John Paul II recollects his years as a prelate in communist-era Poland in his new book, telling how he was summoned from a canoeing trip to hear of his appointment to be bishop and how he clashed with authorities.

"Get Up, Let Us Go," being published Tuesday on the pope's 84th birthday, is a sequel to "Gift and Mystery," an account of the pontiff's early priesthood that was released in 1996.

The book, obtained by The Associated Press ahead of publication, draws on the pope's years in Krakow, where - as Karol Wojtyla - he served as bishop and then archbishop.

The book spans a 20-year period from the late 1950s through his election as the first Polish pope in 1978.

In 1958, the pope recalls, he was on a canoeing trip when he was called to Warsaw by the head of Poland's Roman Catholic Church, Cardinal Stefan Wyszynski, to be told he was being named a bishop of Krakow.

Wojtyla made his way by canoe and then in a truck full of flour sacks to the nearest train station for the overnight journey. On hearing of his appointment, he told Wyszynski: "Your eminence, I am too young - I am only 38."

"The primate responded: 'This is a weakness of which we are quickly cured. Please do not oppose the Holy Father's wish,"' the pope wrote.

Wojtyla then returned to Krakow and asked his archbishop for permission to resume the canoeing trip.

"You are welcome, but please get back for the consecration," replied the archbishop, Eugeniusz Baziak.

The book recounts communist efforts to suppress the church in Poland, Wojtyla's clashes with authorities to protect it and of clandestine meetings he organized with intellectuals and scientists.

The pope recalls a "constant fierce struggle" to get a church built in the industrial Krakow suburb of Nowa Huta, designed as a model socialist town with a steelworks at its heart.

Communist authorities gave, and then revoked, permission for a new church - a decision that resulted in a fight between security forces and residents who had erected a cross.

"In the long term, the battle was won, but at the price of a long war of nerves," the pontiff writes.

John Paul says he viewed his first trip as pope - to Mexico in January 1979 - as "a pass that could open the way to a pilgrimage to Poland."

"I thought the communists in Poland would not be able to refuse me a visit to my homeland if I were received by a nation with a secular constitution, such as Mexico had," he added. That June, the pope made his first visit to Poland.

In a moment of self-criticism, the pope notes that "a part of a pastor's role is to admonish" and says that maybe he failed to be strict enough during his time in Krakow.

"Maybe I should reproach myself that I did not try to rule enough" in those years, he writes. "But it stems from my character."

The pope wrote the book in March-August 2003, writing some parts himself in Polish and dictating others. John Paul is maintaining a heavy schedule despite Parkinson's disease and knee and hip ailments.

The young Wojtyla studied literature at Krakow's Jagiellonian University, and has published poems, plays and essays during his decades as a priest, bishop, cardinal and pope.

The latest book is being published in Polish, Italian, French, German and Spanish. Italian publisher Mondadori says it is still negotiating the rights for the English-language edition.

The book will be launched by Mondadori in Rome during a glitzy reception Tuesday evening in the recently restored Stables of the Quirinale Palace, a former papal residence now occupied by the Italian president. The Polish version is being released at the Archdiocese Museum in Krakow.

The royalties from the latest work will go into a special fund for charitable use, Vatican spokesman Joaquin Navarro-Valls said.