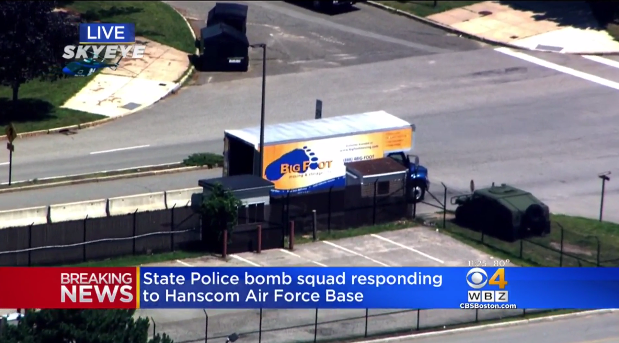 BEDFORD, Mass. -- Operations were resuming at Hanscom Air Force Base Thursday afternoon, after trace explosive residue was found on a moving truck at the base, causing an explosive scare that triggered evacuations, CBS Boston reports.

Authorities responded to the base around 9 a.m. and later called in the Massachusetts State Police bomb squad for assistance. The FBI is also assisting in the investigation, but declined further comment.

"Security Forces detected some potentially explosive material, which caused the base to put response actions in place," Hanscom officials said in a statement. "Those actions included a temporary closure of the base's Vandenberg (Rte 2A) Gate and evacuation of several nearby base facilities."

The State Fire Marshal's office said authorities assessed two suspicious vehicles, adding that standard protocol was being followed. As a precaution, the base's Vandenberg Gate was temporarily closed and several facilities were evacuated.

A perimeter was set up extending 1,500 feet from the truck in all directions. Hanscom Field airport remains open.

Big Foot Moving and Storage CEO Mike Bavuso said the truck contained "household goods" that were being delivered to the base. Bavuso said it is unknown what triggered the response, adding that the company is working with authorities.

"Our vehicle and personnel have been cleared and we are thankful that the incident has been resolved," said Bavuso. "We assure our customers that we take this matter very seriously. The safety of our crew, customers and their goods is of utmost importance to us. We thank all the authorities and military personnel for their thoroughness and their commitment to protecting our country every day."

Pallets that tested positive for explosive residue will be tested by a chemist. State Police said it will be a "high priority" to determine what caused the incident.

Bedford Police said they were monitoring the situation earlier in the day, but there was "no danger to the community."

Hanscom Air Force Base, which covers 848 acres, is headquarters to the 66th Air Base group. More than 10,000 people work at the base, which has more than 150 buildings. The base spans land in Concord, Bedford and Lincoln.

No injuries have been reported. The investigation is ongoing.