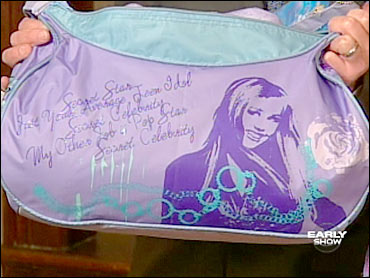 There are hundreds of Hannah Montana products on store shelves. Last year, their sales totaled about $100 million.

But, reports CBS News correspondent Sandra Hughes, they might not all be safe.

The Hannah Montana character is so popular, her TV show spawned a sold-out nationwide concert series and a movie.

It's no wonder Hannah Montana's face is on so much that "tween" girls own, from backpacks to purses to wallets.

But, like so many vinyl products made in China, some of these have been discovered to contain lead, according to Charles Margulis of the independent California lab, the Center for Environmental Health.

"We purchased 28 Hannah Montana products," he told Hughes, "and of those 28, nine had high levels of lead."

To see key parts of the lab's report, which names names of the products in question, click here.
The center, which has tested everything from lunch boxes to baby bibs, says it found that the paint and vinyl of five products lead levels higher than fededal standards permit, and four more exceeded the level The American Academy of Pediatrics has set for toys.

Washington has set that level for lead for paint, but hasn't set one for toys. The American Academy of Pediatrics has set a standard for toys, and it's much lower than the government's lead-in-paint standard -- only 40 parts per million. Other experts say there's no safe level of lead for something a child might put in his or her mouth.

Offcials of Disney, which owns the Montana character, vehemently deny their products have high concentrations of lead, saying their tests show the products fall well below government standards.

But Margulis warns that, "Lead is toxic to teenagers, to young children, and even young adults, especially young women."

One-hundred-twelve toy products were recalled last year due to concerns about their lead content. While 19 states have laws banning the use of lead in packaging of children's products, only Illinois bans lead outright in those products.

The Consumer Products Safety Commission wouldn't comment for this story, and hasn't announced any recalls in this case.

A bill to beef up the CPSC is making its way through Congress. It could lead to an eventual ban on lead content in toys.

In the meantime, there's little a parent can do but watch for recalls or buy a home-testing kit. But such a kit will only show the presence of lead, not how much lead is on a toy or in its paint.