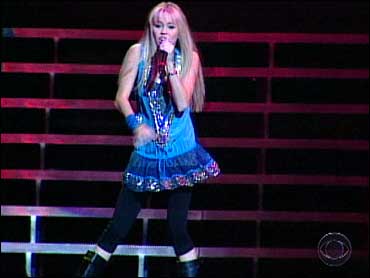 It was ever so brief, but the use of a body double by Miley Cyrus on her best-selling "Hannah Montana/Miley Cyrus 'Best of Both Worlds"' tour is creating plenty of buzz.

A video posted on YouTube shows the 15-year-old entertainer as "Hannah" dancing onstage with a group of dancers and the Jonas Brothers, also on the tour. During the song, someone ushers her offstage via a trap door. Immediately, another girl dressed like the character "Hannah" in the same pink trench coat with blonde hair covering her face dances around, runs up the stage set, and then quickly leaves.

While the double is holding a microphone for less than a minute, the girl motions like she is singing. However, a rep for Miley said the switch was only for costume purposes.

"To help speed the transition from Hannah to Miley, there is a production element during the performance of 'We Got the Party' incorporating a body double for Miley," according to statement Friday from the public relations firm PMK.

"After Hannah has completed the featured verse on the duet with the Jonas Brothers, a body double appears approximately one to two minutes prior to the end of the song in order to allow Miley to remove the Hannah wig and costume and transform into Miley for her solo set. Other than during this very brief transitional moment in the show, Miley performs live during the entirety of both the Hannah and Miley segments of the concert."

Miley's "Hannah Montana" tour is one of the nation's hottest tours, selling out within minutes when tickets went on sale last fall. Some people have been reselling tickets for thousands of dollars. Miley has released two albums under the "Hannah Montana" brand, both of which have sold more than two million copies.

The "Hannah Montana" is an offshoot of the Walt Disney Co. TV show.