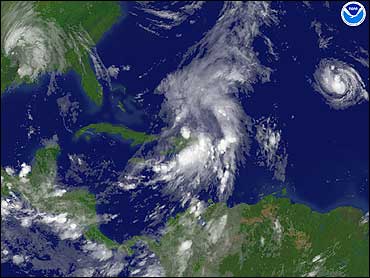 Tropical Storm Hanna knocked out power to the southern Bahamas on Wednesday and officials from Nassau to South Carolina warned residents to prepare for possible evacuations as it moves north and grows into a hurricane.

The storm, with winds near 65 mph, turned to the northwest after lingering for days near Haiti, where it caused flooding that killed 26 people.

"I now urge the general public to take the necessary precautions," Turnquest said at a news conference Wednesday.

As Hanna took aim at the heart of this Atlantic archipelago, islanders were also tracking two other storms churning westward in the open ocean, including Ike, which rapidly swelled late Wednesday evening into a ferocious Category 4 hurricane with winds near 135 mph.

Ike was roaring far out in the Atlantic, 610 miles northeast of the Leeward Islands, and forecasters said it was too early to say if it would threaten land. It is moving toward the west-northwest at 17 mph.

Ike is the third major hurricane of the Atlantic season, which runs from June 1 to Nov. 30. The other two are Bertha and Gustav.

Forecasters say Josephine, the tropical storm behind Ike, is weakening.

"We've got three of them on the way. We've just got to be prepared," said Frank Augustine, a 47-year convenience store manager, as he bought 10 five-gallon water jugs under blue skies at a Nassau depot.

Only a few dozen of the Bahamas' roughly 700 islands are inhabited, but they are near sea level and have little natural protection. In the south, Hanna knocked out electricity in Mayaguana Island and forced the closure of some small airports including those in Long Island and Acklins Island.

The storm was expected to pass near or over the central Bahamas on Thursday before reaching hurricane strength. But the National Hurricane Center in Miami warned its reach was expanding, with tropical-storm force winds extending up to 290 miles from the center.

"Hanna has become a large tropical cyclone," the center said.

Late Wednesday evening, Hanna was centered 355 miles east-southeast of Nassau, Bahamas. The hurricane center said Hanna was moving north-northwest at 13 mph and could become a hurricane on Thursday.

The hurricane center said a hurricane watch may be required for a portion of the southestern United States early Thursday.

Long-range forecasts call for the storm to hit anywhere from Georgia to North Carolina on Saturday and curve along the U.S. Atlantic coast.

Hanna would be the second major storm to make landfall in the U.S. in the past week, with Hurricane Gustav striking the Gulf Coast Monday, sending nearly 2 million residents fleeing. The process of returning home is underway.

In the Caribbean, Hanna has drenched the Turks and Caicos and Puerto Rico but wreaked the most havoc in storm-weary Haiti, where it flooded the western city of Gonaives.