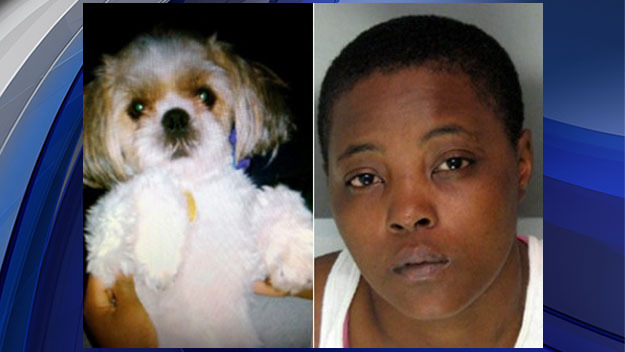 NEWARK, N.J. -- A New Jersey woman who fatally threw her neighbor's small dog into traffic during an argument over a parking space was sentenced to four years in prison Wednesday.

Haniyyah Barnes was also ordered to pay the neighbor $2,000 in restitution and perform 30 days of community service to an organization involved with the prevention of cruelty to animals.

The 29-year-old Newark resident was convicted last October on animal cruelty, theft and criminal mischief charges stemming from the August 2011 death of the 2-year-old Shih Tzu named Honey Bey. But the Essex County jury could not reach a verdict on a burglary charge; prosecutors have said they plan to retry her.

Prosecutors say Barnes kicked in the front door of her neighbor's home, grabbed the dog because it started barking and threw the animal into oncoming traffic, where she was struck by a vehicle and killed.

A police officer who was sitting in a patrol vehicle saw what happened and immediately arrested Barnes.

Barnes' attorney, Michelle Treiber, had argued at trial that Barnes did not kick in the door and commit a burglary. Treiber also claimed prosecutors had not proven that Barnes was guilty of the animal cruelty offense, urging the jury to instead convict Barnes on the lesser offense that she needlessly killed an animal.

Barnes had pleaded guilty in April 2014 but a judge allowed her to withdraw her plea last year.