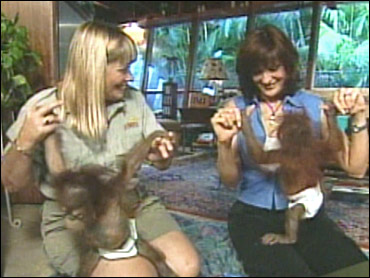 There are two sisters in Miami, Fla., who are not your everyday set of twins. They're a couple of apes. And boy, are they cute.

Raising twins is never simple, but The Early Show correspondent Melinda Murphy found that for Linda Jacobs, life with two little ones is a bit "hairier" than most. That's because these twins are orangutans.

Jacobs says, "Some times it does take a little patience. But I find them so fascinating, though, that it is the easiest thing in the world. I would never have this kind of patience for a human. Never!"

The 7 month-old sisters are extra special because they're the first set of twin orangutans born in captivity in more than 20 years.

These little ones started "hanging out" with Jacobs when they became too much for their real mom to handle.

Jacobs says, "It became evident to us that one of them was considerably smaller than the other and we realized that mom just wasn't producing enough milk to keep up with the demands of them."

After all, they eat every three hours or so. Middle of the night feedings is one reason they often sleep over at Jacobs' Miami home. But each morning, they travel to Parrot Jungle Island, an animal theme park where Jacobs works.

These lucky sisters have their very own nursery there with a few special add-ons for babies who are particularly good at climbing out of a playpen - something we, humans, just love to see.

Watching them is a blast, Murphy says, because these little apes always seem to be monkeying around.

So far, the twins are being called Peanut and Pumpkin. And like any good mother, Jacobs has no problem telling them apart.

"Pumpkin is the more adventurous one," Jacobs says. "She will try new things out more readily than Peanut will. Whereas Peanut, she'll follow Pumpkin in what she will do. But she has to be much more comfortable with the actions."

Of course, no mother of twins does it alone. Serena Moss helps out, too. She's an anthropologist by training.

It turns out the twins aren't very different from human babies.

Moss explains, "They're so similar to us, it is unbelievable. I think they share about 98 percent of the same DNA, depending on the literature. When you're looking at the behavior of the orangutan, when they're young, it is uncanny the similarity that you're going to see between humans and apes in general."

And like human babies. they go through lots of diapers.

Jacobs says, "We put them on backwards because it makes it easier to control them. And then, it's harder for them to reach the tape."

Maybe so, but diapering is no easy feat. The eventual goal is for them share a habitat with Hannah and Jake - two other orangutans who already live at Parrot Jungle Island. And hopefully one day, they will be reunited with their mother.

Jacobs says, "You go into knowing that these are not humans, that they're wild animals, that you love and you nurture, but you want them to grow up to be what they're supposed to be. And that's orangutans."

Which means Peanut and Pumpkin will live with Jacobs for only another year or so.

She says, "I'll certainly miss hugging them. But I'll be thrilled to watch them thrive and be what they're supposed to be."

Raising orangutans in captivity is really important because they're one of the most endangered species on the planet. They're found on only two islands in Indonesia, and those habitats are quickly shrinking.

It's estimated orangutans may be extinct in the next five to 10 years in the wild.