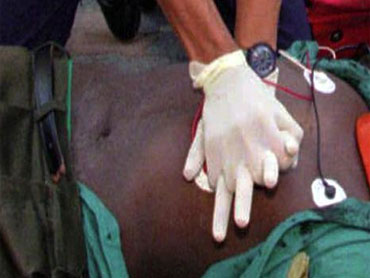 (CBS/AP) If a stranger passed out on the sidewalk in front of you, how likely would you be to administer mouth-to-mouth?

In our age of no-touch faucets in public bathrooms and special disinfectant wipes for grocery store carts, you wouldn't be alone if you say you might hesitate.

Happily, two new studies conclude that when it comes to CPR, pressing rhythmically on the chest with your hands is enough to save a life.

The American Heart Association, which has been promoting hands-only CPR for two years, hopes that bystanders will feel less apprehensive and more likely to act if faced with an emergency.

The traditional method is a bit complicated, and one study showed that those who did attempt it often didn't do it very well. For starters, the victim's head has to be tilted back, the airway cleared, the nose pinched and the mouth completely covered with the rescuer's.

There are many opportunities for air to escape, and some experts believe that some bystanders perform mouth-to-mouth so poorly that the interruption reduces blood flow.

Yet the aim of CPR is to do some of the mechanical work of the heart by forcing at least some blood and oxygen to the brain and other vital organs, which is why chest compressions work.

The only cases in which mouth-to-mouth seems to make a difference is when the victim is a child, or in cases of adults who have stopped breathing because of choking, drowning or other respiratory problems.