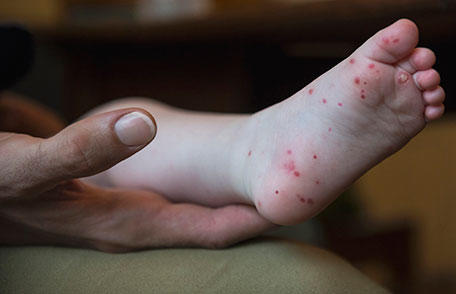 A contagious childhood illnesses with a memorable name appears to be spreading across several states. Doctors are reportedly seeing more and more cases of hand, foot, and mouth disease — and children aren't the only ones being affected.

According to multiple reports, doctors are seeing outbreaks in Indiana, South Carolina, Tennessee, and Virginia. And two Major League Baseball players in New York City have also been diagnosed with the disease.

Last week, the New York Mets said pitcher Noah Syndergaard contracted hand, foot, and mouth disease while appearing at a baseball camp for kids during the All-Star break. And just yesterday, it was announced that New York Yankees starter J.A. Happ has a mild case of the illness, CBS Sports reports.

"This year we're getting a lot of hand, foot and mouth disease (cases)," Dr. Keith Tolar of Deaconess Pediatric Urgent Care in Evansville, Indiana, told the Courier-Press. "We've been seeing it all summer and a little bit of an uptick in the last week or two."

Hand, foot, and mouth disease, which is caused by a virus, gets its name from the small red sores or rashes that often appear in the mouth and on the palms of the hands and soles of the feet. It's a common illness among children under the age of 5, but older children and adults can catch it as well.

Dr. Elizabeth Mack, an associate professor of pediatric critical care at the Medical University of South Carolina, says symptoms can arrive several days after a person gets infected.

"It's characterized by... so often a fever, then followed by sore throat, then often a runny nose and then comes the rash," Mack told CBS affiliate WCSC. "The rash can be blistery... regarding the mouth, it can be on the inside of the cheeks, the tongue, the gums, and then it can be on the fingers, the palms of the hands, the soles of the feet and even on the buttocks."

Hand, foot, and mouth, which is often linked to poor hygiene among young children, can be spread through kissing, hugging, or sharing food and drinks. The disease can also be transmitted by coughs, sneezes, or contact with the germs from a baby's diaper.

"The way that it's managed, there's no particular magic medicine or drug. It's just about hydration, pain medicines, whether that's an acetaminophen or ibuprofen, talking with your pediatrician about that, as well and a lot of TLC, washing your hands in between that TLC," Mack explained.

The disease often spreads through day care centers and schools in a similar way to the common cold. Parents with children who have open blisters and a fever should keep them home.

To reduce the risk of contagion, wash your hands thoroughly, especially after contact with children. The illness normally lasts between seven and 10 days. In rare cases, complications can develop, including viral meningitis or a polio-like paralysis.