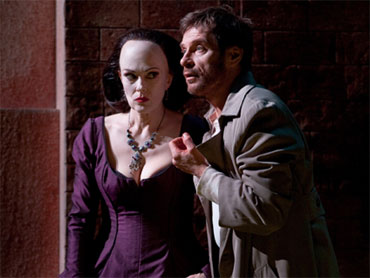 Ambroise Thomas' "Hamlet" was last performed at the Metropolitan Opera in 1897, and it's easy to see why more than a century passed before its revival.

Even with two outstanding singing actors in the lead roles, the work exudes at best a fragile charm, a refinement typical of French grand opera that is worlds apart from the visceral excitement Verdi summoned for his adaptations of Shakespearean tragedy, "Otello" and "Macbeth."

On Tuesday night, the Met brought back "Hamlet," with one of the crucial ingredients for success - the fine English baritone Simon Keenlyside as the tormented hero. He first sang the role in this production in Geneva in 1996, and his interpretation is riveting. He couples athletic agility and grace with a brooding intensity as Hamlet confronts his father's ghost and then resolves to kill Claudius, the uncle who usurped the throne.

Blessed with an intrinsically beautiful voice, Keenlyside brings a tender quality to his love duet with Ophelia, a bracing bravado to his drinking song, and a sense of barely controlled fury to his encounter with his mother, Gertrude. His voice, while not huge, projects well into the vast Met auditorium, with only an occasional straining on some high notes.

His partner in previous runs of this production was the French coloratura soprano Natalie Dessay, and she had been scheduled to take the part of Ophelia at the Met. When she canceled because of illness, the company brought in the German soprano Marlis Petersen, who performed something of a heroic feat. She finished another engagement in Vienna on Friday, flew to New York on Saturday, then had all of two days to rehearse before opening night.

Under the circumstances, she did a creditable job, though she did not appear to have had time to develop much chemistry with her co-star. Vocally, she is a little underpowered in her lower register and her sound tends to harden on her highest notes. But the role of Ophelia is really all about her extended mad scene, and here Petersen had some lovely moments of pathos, even if she didn't always project a sense of her character's derangement. She wasn't helped by the production, which moved the setting from a riverbank to a room in the castle and made Ophelia die by stabbing herself instead of drowning.

Some other aspects of the production, by Patrice Caurier and Moshe Leiser, worked better: the opening scene with the chorus advancing from darkness for the coronation; the play of lights on the ramparts when Hamlet first sees the ghost; the spooky pantomime of the play-within-a-play that prompts Claudius to reveal his guilt; the gravediggers hacking into the stage floorboards to prepare for Ophelia's burial.

But the ending is a mess. Thomas' original version has Hamlet survive to be crowned king. He wrote an alternate finale more faithful to Shakespeare, but this Met production conflates the two in a confusing and dramatically implausible way. First he and Ophelia's brother, Laertes, fight a brief duel (it's staged more as an embrace) and apparently wound each other mortally. Hamlet survives just long enough to mourn Ophelia and then, at the renewed prompting of his father's ghost, stabs Claudius through the heart and dies.

In supporting roles, mezzo-soprano Jennifer Larmore as the fearful, guilt-ridden Gertrude all but chewed the scenery and hit her high notes with aplomb. (Her wig emphasized a balding forehead and made her look like one of Disney's wicked stepmothers.) Veteran bass James Morris sounded gruff and anguished as Claudius. Debuting tenor Toby Spence made a terrific impression in his two scenes as Laertes.

Louis Langree conducted the orchestra, which sounded uncharacteristically ragged at the outset, but soon settled down.