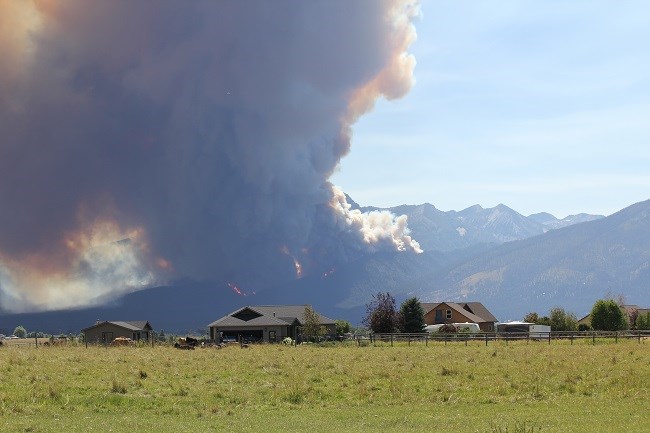 HAMILTON, Mont. - The residents of at least 500 homes are under orders to evacuate because of a fast-moving wildfire southwest of Hamilton that has already claimed a number of structures.

The wildfire -- dubbed the "Roaring Lion Fire" -- Sunday afternoon is at least a half square mile and is heading up Roaring Lion Road in the Bitterroot National Forest and down the canyon, officials said.

The speed of the has left locals in shock, KXLH reports. By conservative estimates, the fire was growing at a rate of 200 acres per hour after it started early Sunday afternoon. Driven by gusty downslope winds funneled right down the valley, the fire was racing through the foothills southwest of Hamilton.

Structures in the Judd Creek area have been lost to the wildfire southwest of Hamilton, Ravalli County Sheriff Chris Hoffman told the Missoulian.

Hoffman did not give a specific number of structures that have been destroyed. Authorities do not know yet how the fire started, he said.

"We are asking for people to cooperate," he said. "We can't let people back up there . this is a big area. If you pull the radar, you'll see the plume is huge. We've got fairly steady high winds up in the canyons, and this fire has just launched."

Resident Pamela Caughey, who lives on the road, said the fire started about 3 p.m. Sunday. Caughey, who evacuated, tells the Missoulian that she thinks her house as well as the homes of several neighbors are gone.

Caughey estimates that there are at least 50 homes on Roaring Lion Road.

"It's horrible," Caughey said. "Firefighters told me they were going to do everything they can."

Two helicopters are headed to the fire, the Missoulian reported.