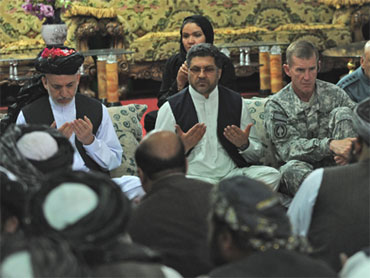 The spokesman for Afghan President Hamid Karzai says the leader believes Gen. Stanley McChrystal is the "best commander" of the war.

McChrystal has been summoned to Washington to explain derogatory comments about Obama administration officials - many made by McChrystal's aides - in an article in Rolling Stone magazine.

Omar says Karzai believes McChrystal "is a person of great integrity who has a very good understanding of the Afghan people and the Afghan culture."

McChrystal apologized Tuesday for using "poor judgment" in the interview, which paints him as deeply disconnected and displeased with the Obama administration.

"I extend my sincerest apology for this profile. It was a mistake reflecting poor judgment and should never have happened," said McChrystal, adding that he remains "committed to ensuring" the successful outcome of the almost nine-year-old Afghan war.

McChrystal has been ordered to appear at tomorrow's monthly White House meeting on Afghanistan and Pakistan in person rather than by the usual teleconference, an administration official told CBS Radio News White House correspondent Peter Maer.

The official said McChrystal "will have to explain to the Pentagon and the Commander in Chief his quotes in the piece about his colleagues."

The interview describes McChrystal, 55, as "disappointed" in his first Oval Office meeting with Obama. The article says that although McChrystal voted for Obama, the two failed to connect from the start. Obama appointed McChrystal to lead the Afghan effort in May 2009. Last fall, though, Obama called McChrystal on the carpet for speaking too bluntly about his desire for more troops.

Obama agreed to dispatch an additional 30,000 U.S. troops to Afghanistan only after months of study that many in the military found frustrating. And the White House's troop commitment was coupled with a pledge to begin bringing them home in July 2011, in what counterinsurgency strategists advising McChrystal regarded as an arbitrary deadline.

The Rolling Stone profile, titled "The Runaway General," emerged from several weeks of interviews and travel with McChrystal's tight circle of aides this spring.