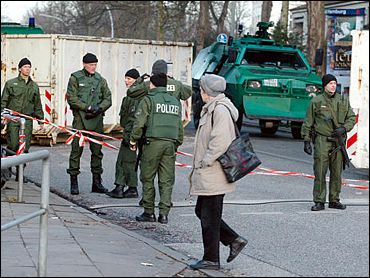 Several German states tightened security Wednesday around some U.S. military bases and other sensitive facilities after American warnings that Islamic militants may carry out attacks.

The same U.S. tip prompted authorities in Hamburg on Tuesday to seal off a German military hospital cited as a possible target for three days.

Some criticized Hamburg authorities for exaggerating their reaction — police have found nothing suspicious at the hospital and made no arrests. The closure and Wednesday's heightened security in several states reflect German jitters amid European-wide warnings of possible terror attacks over the holidays.

"The indications are a further warning that Germany is no longer safe (from terrorism), but that attacks can also be carried out here," said Bavarian interior minister Guenther Beckstein.

A spokesman for Beckstein said that in the wake of the warning, Bavaria had increased security, especially around the dozens of U.S. military bases in the state. Rhineland-Palatinate authorities have done the same.

Security officials in the western state of Hessen said they had increased security at "particularly sensitive facilities," including the U.S. Rhein-Main Air Base in Frankfurt and another U.S. military base in nearby Wiesbaden.

U.S. military officials said they had no indications of any increased threats to bases in Germany.

In Hamburg, authorities defended their decision to seal off the German military hospital in the suburb of Wandsbek, in the face of criticism from the nation's top security official.

German Interior Minister Otto Schily said Hamburg authorities acted too swiftly on tips that were unsubstantiated, adding that making the issue public hampered efforts to follow up on them.

Hamburg officials argued the information was concrete and the city's recent history with terrorists meant they had to act quickly. Hamburg was home to an al Qaeda cell that included three of the Sept. 11, 2001, suicide pilots.

"Both the federal and state branches of the German Agency for Internal Security informed us in writing about the concrete risk of a terror attack," Hamburg interior minister Dirk Nockemann said.

Nockemann said the tip concerned two alleged suicide attackers linked to the Ansar al-Islam group who entered the country earlier this month. They allegedly had plans to target a German military facility in Hamburg with a car bomb in the first weeks of January, he said.

Some German media also accused Nockemann, whose party rode to power in Hamburg on an anti-immigration platform and beefed up security following the Sept. 11 attacks, of overplaying the threat to draw attention to his policies.

U.S. officials believe the northern Iraq-based Ansar al-Islam has links to al Qaeda and recruits holy warriors in Europe for suicide missions in Iraq. In November, Hamburg police arrested the alleged ring leader of a group seeking recruits for a training camp run by Ansar al-Islam.