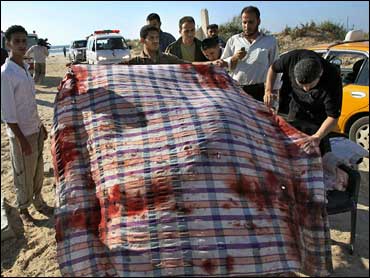 "The earthquake in the Zionist towns will start again," said a leaflet distributed at a Hamas rally Friday night. "The resistance groups ... will choose the proper place and time for the tough, strong and unique response."

Israel and the Palestinians declared the truce in February 2005. Hamas, which has killed scores of Israelis in suicide bombings, has largely abided by the cease-fire.

Friday's attack fueled anger spawned by a fatal Israeli airstrike Thursday on a top militant commander in the Hamas-led government. Tens of thousands of people, including angry militants defiantly shooting in the air, packed a southern Gaza soccer stadium for the man's funeral.

In the West Bank, Palestinian President Mahmoud Abbas condemned what he called a "bloody massacre" in Gaza and called on the international community, including the United States, Europe and the U.N. Security Council, to intervene.

The Palestinian president declared a three-day mourning period and said embassies around the world would be closed and flags would fly at half staff.

Abbas, a moderate who leads Fatah, is eager to restart long-stalled peace talks with Israel, and was expected Saturday to formally announce a July 31 date for a national referendum on establishing a Palestinian state alongside Israel.

Hamas Prime Minister Ismail Haniyeh sent a letter to Abbas on Friday urging him not to hold the vote and to continue negotiations over the plan. He said the referendum would divide the Palestinian people and instead proposed forming a national unity government with Fatah.

"The idea of the referendum now on the table carries many dangers," Haniyeh wrote. "I'm afraid it will cause a historic rift that will hurt the Palestinian cause for decades to come."

The Israeli army said it attacked northern Gaza Strip areas that Palestinian militants use to fire homemade rockets at Israel. But one artillery strike appeared to go dramatically off course.

The shells struck a crowd at a beachside picnic, killing seven and wounding more than 30, Palestinian Health Minister Bassem Naim said. A woman and two children younger than 2 were among the dead, medical officials said. All the dead were believed to be related.

The barrage destroyed a tent and scattered body parts along the beach. A panicked crowd screamed and ran around in confusion as paramedics carried the bodies away.

The death toll in Gaza was the highest since Hamas took office in March after winning legislative elections.

Sami Abu Zuhri, a Hamas spokesman in Gaza, said the attack showed "the Zionist occupation ... does not distinguish between civilian children and freedom fighters."

The Israeli military said its chief, Lt. Gen. Dan Halutz, ordered a halt in artillery attacks in the area while an investigation was conducted.

Israel offered medical assistance, including evacuation to hospitals in Israel, to the wounded.

The latest violence began after an Israeli airstrike killed Jamal Abu Samhadana, the highest-profile militant commander that Israel has slain in four years. He recently was commander of the Hamas government's private militia.

Hamas, sworn to Israel's destruction, interpreted the attack as an assault on its government and warned Israel that Abu Samhadana's death would be avenged.

"All options are open for the resistance groups to deliver a message to the enemy that must equal the magnitude of Abu Samhadana's loss," Hamas lawmaker Mushir al-Masri told Hamas Radio.

It was unclear whether Hamas, which suspended its suicide bombing war against Israel in February 2005, would take direct action against Israel or simply back other factions' operations, as it has done in the past.

Unidentified militants in the Gaza Strip fired four rockets into Israel on Friday, hitting a building in the southern town of Sderot but causing no casualties, the military said. Israel retaliated with artillery fire.

Israel frequently targets sites used by Palestinian militants to fire rockets toward Israel. Israel carried out at least three airstrikes, including one that killed three militants after they fired a rocket into Israel.

Abu Samhadana, the leader of the small Popular Resistance Committees faction, was revered in Gaza as a key figure in Palestinian rocket attacks against Israel.

A suspect in a deadly bombing of a U.S. convoy in Gaza in 2003, he maintained strong ties with the various Palestinian factions and belonged to one of the most powerful clans in the teeming Rafah refugee camp.

Hundreds of gunmen escorted Abu Samhadana's body from the morgue to his house and then through the streets of Rafah on the way to the stadium. They fired thousands of bullets in the air, chanting, "God is great!" and "Revenge! Revenge!"

The prayer service proceeded quietly, and mourners streamed out of the stadium afterward toward the cemetery. Some chanted "God is great!" and "We are ready to redeem you with our souls and our blood!"

The funeral was the largest in Gaza since Hamas leader Abdel Aziz Rantisi was killed in an Israeli airstrike in April 2003.

As a key Israeli target, Abu Samhadana moved stealthily, switching cars and hideouts. Just a few days before his death, he told The Associated Press in a back alley interview that the U.S. government and its people would "pay a dear price" for leading bruising economic sanctions against the Hamas-run Palestinian Authority for its refusal to disarm militants and recognize Israel.

He said he had security measures in place against Israeli attack.

"They don't catch me. I hunt them," he boasted.