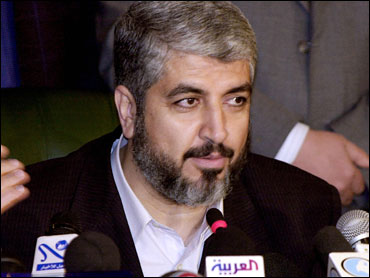 Khaled Meshaal, the political leader of the Palestinian militant group Hamas, said Wednesday that a long-term truce with Israel would be possible, if it accepted conditions including a return to its 1967 borders.

However, they rejected demands by their Egyptian hosts to recognize Israel, describing recognition as out of the question, reports .

"Hamas will not recognize Israel," Mashaal said. "We will not give legitimacy to occupation."

That position is making it hard for Hamas, which seeks Israel's destruction, to form a new government with the more moderate Fatah party, Berger reports. The participation of Fatah would help Hamas win international legitimacy, but Fatah says it won't join Hamas unless the latter accepts the peace process.

Meanwhile, acting Israeli Prime Minister Ehud Olmert said Tuesday that Israel will retain its main West Bank settlement blocs and all of Jerusalem when its permanent borders are drawn, but will give up parts of the West Bank where most Palestinians live.

Israel had part of Jerusalem before 1967's Six Day War, but occupied the rest of it in that war and annexed it in 1981. The international community considers East Jerusalem to be occupied territory. Both Israel and the Palestinians claim Jerusalem as their capital.

And the militant Islamic Jihad group, which carried out six suicide bombings against Israelis in the past year, rejected the idea of a long-term truce with Israel, saying attacks will continue.

Batch's comments signaled that even if international pressure succeeds in persuading Hamas to moderate its violent ideology, other Palestinian radicals are not likely to follow suit.

In an interview with the British Broadcasting Corp., Meshaal also said Hamas would not renounce violence since it believed that resistance against what it considers an occupation is legal.

Meshaal said he wanted to send a message to the next Israeli government that Hamas would be ready to talk, if Israel met conditions that included a withdrawal to the boundaries that Israel had until the 1967 Middle East war.

Hamas would then "possibly give a long-term truce with Israel," he told the BBC.

"This is a position that Hamas could take, but not now, only after Israel recognizes the rights of the Palestinians, to show and confirm its willingness to withdraw to the 1967 borders," he said.

Meshaal said such a move by Israel could create conditions for the international community to find a solution for all of the region's problems.

But Meshaal, who lives in exile in Damascus, Syria, also said Hamas was capable of leading the Palestinians in a long fight that they would be better able to bear than Israel.

BBC said the interview was conducted in the Cairo, Egypt, where Meshaal and other Hamas leaders were meeting to discuss the next step after the group's surprising victory over the Fatah Party in the Jan. 25 Palestinian election.

Olmert said Israel will withdraw from heavily populated Palestinian areas of the West Bank, reports . The acting Israeli prime minister also said Israeli is prepared to draw its new borders unilaterally if a peace deal with the Palestinians cannot be reached.

Olmert also said he was "not giving up" on the internationally backed "road map" peace plan, which calls for negotiations toward a Palestinian state.

Olmert told Channel 2 that Israel would retain "united Jerusalem," a term understood as encompassing the eastern section claimed by the Palestinians for the capital of the state they hope to create. On Tuesday, Olmert toured construction sites of the separation barrier Israel is building in the Jerusalem area and said its completion is "the highest priority."

The barrier is to extend along the length of the West Bank, dipping into the territory to encircle the settlements Olmert listed and others. Israel says the barrier is necessary to keep suicide bombers out, but Palestinians denounce it as a land grab.

About three-fourths of Israel's 244,000 West Bank settlers live in the areas Olmert delineated in the TV interview, according to government figures and estimates by the Peace Now settlement watchdog group.

Pressed about whether he would move unilaterally if there are no talks, Olmert said, "Let's not talk hypotheticals."

Olmert, who took over from ailing Israeli Prime Minister Ariel Sharon a month ago, hopes to replace him by winning the March 28 Israeli election.

In all, 11 Palestinians have been killed by Israeli fire since the weekend. One was an armed man shot dead Wednesday by soldiers as he approached a Gaza-Israel border crossing. Others have died in Israeli reprisals for a flareup in Palestinian rocket attacks from the Gaza Strip on southern Israel, in which a 7-month-old baby was among several people hurt. Some of the Palestinians killed were targeted in Israeli airstrikes.

On Tuesday, U.N. Secretary-General Kofi Annan expressed concern about the targeted killings, saying they amounted to executions without trial and put civilians at risk.

In the West Bank, meanwhile, an international observer force — the Temporary International Presence in Hebron, or TIPH — came under attack Wednesday by an angry crowd. TIPH was deployed in 1994 and serves as a buffer between Palestinians and Jewish settlers in the city.

Eleven Danish members of TIPH left more than a week ago after protests against the Danish cartoons began sweeping across the Muslim world, said TIPH spokeswoman Gunhild Forselv.