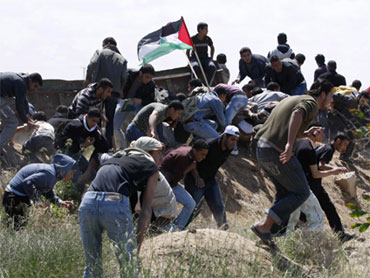 Gaza's Hamas rulers indicated Friday they were trying to keep attacks on Israel in check, in an apparent attempt to keep a recent spate of violence from spiraling into open conflict.

Hamas made this known just hours after Israeli aircraft pounded multiple targets in the territory in response to the latest rocket attack on southern Israel. Three Palestinian children were wounded in one of the Israeli airstrikes, Gaza health official Dr. Moaiya Hassanain said.

Hamas has never explicitly criticized attacks against Israel, though top officials have said such attacks don't serve Palestinian interests right now. Friday's statement signaled the Islamic group was pushing to get the territory's other militant groups to honor this policy.

Last year, Israel conducted a devastating military offensive in Gaza after years of rocket attacks. Since then, Hamas has tried to avoid provoking sweeping Israeli military action and has not claimed responsibility for any rockets for more than a year.

But a string of recent Palestinian rocket attacks on southern Israel and retaliatory Israeli airstrikes have ratcheted up tensions. In March, Gaza militants fired nearly 20 rockets and mortars at Israel, about half the more than 40 fired overall since the beginning of the year, according to the military's count. Israel has retaliated with strikes on 28 sites in Gaza since Jan. 1, the military said.

Most of the recent militant attacks have been claimed by groups considered more radical than Hamas who accuse Gaza's ruling movement of going soft on its main rallying cry of armed confrontation with Israel.

The militant group's leadership is eager to avoid being held responsible for increased suffering in Gaza, where 80 percent of the population relies on U.N. food handouts for basic sustenance. Gazans have been unable to rebuild the large swaths of the territory that were damaged or destroyed during the Israeli offensive because an Israeli and Egyptian blockade keeps out building materials.

Israel, for its part, has an interest in keeping tensions in check so its southern communities can live peacefully. New violence in Gaza could also intensify world criticism of Israel as it tries to fend off war crimes allegations linked to its Gaza offensive and to ease friction with the Obama administration over settlement construction.

Hamas, did, however, get involved in gunbattles with Israeli forces last week that were the fiercest since the Gaza war ended in January 2009. Two soldiers and three Palestinians were killed in those clashes, including one whose body was discovered on Friday. One of the Palestinians was a civilian; the Islamic Jihad militant group said the other two were members of its organization.

Hamas officials, speaking on condition of anonymity because they were not articulating official policy, said the group did not mean to get involved in last week's fighting, but found itself forced to do so once the shooting started in order to maintain its standing in Gaza.

Israel holds Hamas solely responsible for maintaining peace in the Gaza Strip. In a statement Friday, the military vowed "to operate firmly against anyone who uses terror against it."

Britain expressed concern over what it called the "escalation of violence" and in a statement from the Foreign Office called on all sides "to show restraint."

In the village of Nebi Salah, security forces fired rubber bullets at demonstrators who threw rocks at them, the military said. Israeli media reported that two protesters were hurt.

The Obama administration has been trying to restart the negotiations, even on an indirect basis using international mediators, but has met little success amid tension between Washington and Israel over the Jewish state's plans to expand settlement construction in contested East Jerusalem.

According to a poll released earlier this week, almost half of Israelis think the country's international standing is poor following Israel's most serious crisis with the United States in decades.