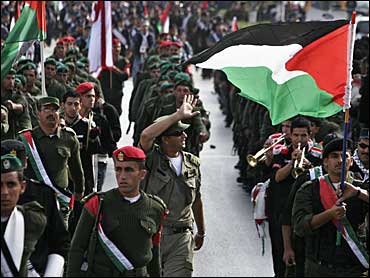 Hamas said Saturday it was shocked Arab countries have decided to attend next week's U.S.-backed Mideast peace summit and underlined its opposition with a threat to launch deadlier rocket attacks on Israel.

Hamas argues the time is not right for talks with Israel because the Palestinians are divided. With the Islamic militant group in control of Gaza, Hamas says moderate Palestinian President Mahmoud Abbas does not have a mandate to negotiate.

"The announcement of the Arabs that they would participate in the Annapolis conference was a great shock for the Palestinian people," Hamas spokesman Sami Abu Zuhri, said in a statement. "Participation opens doors for normalization of relations with the Israeli occupiers."

Another Hamas official said the group was on the brink of developing a more lethal type of warhead for the rockets it regularly lobs from Gaza into Israel.

"They can be developed in a short period to create sufficient terror and fear and make the Israelis live in pain no less than what our people live through because of the repeated incursions into our villages and cities in the West Bank and Gaza," said Ahmed Yousef, an adviser to Ismail Haniyeh, the Hamas prime minister in Gaza.

Israel, which warmly welcomed the Arab League decision Friday to go to the Mideast conference in Annapolis, Md., has repeatedly said it expects Hamas to try and thwart peace efforts.

In a statement sent to reporters, Yousef said the rockets have had "limited effect because they don't carry lethal warheads,"

Israel has launched limited incursions into Gaza in recent months to try halt rocket fire. It has also cut back on fuel to Gaza and plans to reduce electricity supplies to the territory starting Dec. 2.

Residents said the men often scoured the area for cement and other building materials to sell. An army statement said the two men appeared suspicious and were shot as they moved in darkness toward troops at the border fence, which is in an area off limits to Palestinians.

Militants frequently use the area to fire rockets at Israel. However, other Palestinians enter the danger zone to scavenge for building materials or sneak into Israel to work.

Hamas, which refuses to recognize Israel, seized control of Gaza from Abbas' security forces in the summer.

Meanwhile, Syria said on Saturday it was still waiting for a plain affirmation that its primary demand for putting the question of the Golan Heights on the agenda was met by the United States before Damascus publicizes its attendance, reports CBS News producer George Baghdadi in Damascus.

"We will announce our participation once we get the confirmation," said foreign ministry spokeswoman Bushra Kanafani.

"Thus far, we received nothing in this regard," she added with no other elaboration.

The United States came under increasing pressure to allow Syria to raise the issue of the Golan, captured by Israel from Syria in 1967, after Arab foreign ministers put their weight behind the request following a meeting in Cairo, reports Baghdadi.

The Syrians know well the spoiler role they can play in the region and have used that as leverage, knowing that the conference, the first chance in years to begin a dialogue between the Arabs and Israel, will not be as credible if the chair for Damascus is empty.

Syria fully understands that the meeting is mainly intended to launch Israeli-Palestinian peace negotiations after a lull of seven years, but any discussion on the Golan would mean recognition it was not any more internationally isolated.

In the Abbas-controlled West Bank, security forces prevented two Hamas officials from holding a news conference Saturday in the town of Ramallah, cordoning off the building where they had planned to speak about Monday's peace conference.

Journalists were ordered not to photograph or film the officials, who were led away by police.

Hamas members in Gaza said the two men were released after two hours.

In Gaza, about 200 people gathered outside the seafront parliament building, calling on Abbas not to make any concessions to Israel at the Annapolis conference.

In Jerusalem, about 500 Israelis rallied outside Prime Minister Ehud Olmert's official residence, calling on him to make every effort to make peace with the Palestinians.