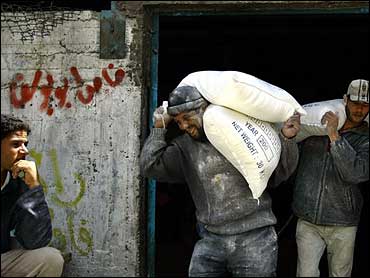 Ayman Shurasi invested his life savings in an amusement park for Gaza's children, replete with "flying" elephants, bumper cars and a smiling Thomas the Tank Engine.

Israel was about to pull out from the fenced-in, desperately poor coastal strip.

"I wanted to erase the bad dreams and bad images from the minds of children and create a child's atmosphere in Gaza," he said.

Just one month into Hamas' rule, international isolation has deprived it of the funds needed to meet Palestinians' basic needs, the Palestinian territories are in political and economic chaos, and the crisis has raised the specter of civil war.

So far, Hamas' experience leading the government after its stunning victory in January's parliamentary elections has done little to tame it. During its first month in office, the group sent envoys to Iran, appointed a notorious bombmaker to head a new militant security force and brazenly defended a suicide bombing in Tel Aviv.

"We understand what is the mentality of Israel, what is their philosophy, and we know that even if we kiss their foot they will not give us anything," Hamas spokesman Ghazi Hamad said.

Despite signs of a rift inside Hamas between pragmatic and hard-line factions, the conservatives — led by Syria-based political chief Khaled Mashaal — appear to be winning the day. That sets Hamas on a collision course with Israel and the West, raising questions about how much longer it can hold onto power.

Palestinian President Mahmoud Abbas, a moderate elected separately last year, has been visiting world capitals to try to reduce his people's isolation following Hamas' rise. At the same time, he is engaged in an intense power struggle with the militant group, especially over control of the security forces.

Angry clashes broke out recently between Hamas and members of Abbas' Fatah Party after Mashaal accused Abbas of "plotting" against his group. Many Palestinians viewed it as a taste of what is to come.

Israel, the United States and Europe are boycotting the new Hamas-run government, demanding the group renounce violence and recognize Israel. That leaves Iran and Syria as its principle allies, in addition to some verbal support from Osama bin Laden, who appeared in a videotape this month lambasting the West for cutting aid to Hamas.

In recent days, Hamas politicians have been snubbed by both Jordan and Egypt, the two most important Arab players in the Israeli-Palestinian conflict.

"I think it's going to be like an earthquake for Hamas. I think people will go into the streets and shout for them to leave," said Hakim Abu Samra, a civil servant in Gaza. "People are looking for someone to solve their problems, not to create more problems for them."

Yet Hamas remains popular — one recent poll showed it with 43 percent support compared with 39 percent for Fatah.

Hamas' popular support poses a dilemma for Israel and the United States, which appear to have adopted a strategy of squeezing the Hamas government financially and diplomatically in the hopes of either deposing it or forcing it to renounce violence.

Yet, if the West squeezes too hard, Palestinians might blame it for their suffering, bolstering Hamas in the process.

A freeze in Western aid and Israel's decision to withhold some $50 million in monthly tax transfers to the Palestinian Authority has left the new Hamas government unable to pay its 165,000 employees, whose salaries form the backbone of the Palestinian economy.

With the salaries nearly a month overdue, the situation is increasingly desperate.

At a butcher shop in the al Amari refugee camp in the West Bank, owner Aviv Hajj said his sales have fallen by 80 percent, but he still supports Hamas because "they are straightforward." His father, 76-year-old refugee Khamis Hajj, also expressed support for Hamas, but like many Palestinians does not share its call for Israel's destruction.

Palestinians' longing to return to their original homes inside Israel, he said, is "like the devil's desire for heaven — there's no way to have it."

"I want to live and they (the Israelis) want to live, so we should both recognize each other," he said.

Hamas won the elections promising to root out the corruption that defined Fatah's four decades in power. But the need to avert imminent economic collapse has left it no time to pursue that or any other initiative.

"They're not going to be able to do what their political and resistance program talked about if they're embroiled with the stupidity of worrying about which bank will recognize their signature," said Daoud Kuttab, director of the Institute of Modern Media at Jerusalem's Al-Quds University.

Kuttab said Hamas is making many mistakes and because of that, "Israelis and Americans are smelling blood."

Palestinian officials said funds pledged by Muslim countries, including Iran, Qatar, Saudi Arabia and Kuwait, have not made it into government coffers because of U.S. pressure on Arab banks not to transfer the money.

U.S. officials refused to discuss specific tactics related to the financial clampdown. But Stuart Levey, the Treasury Department's undersecretary for terrorism and financial intelligence, appeared to confirm that there has been pressure on banks.

"Treasury is speaking with financial institutions, organizations and other entities to clarify how our sanctions apply to the new state of affairs," he said.

Mindful of their bind, Hamas officials have made some attempts at reconciliation.

"We don't want feelings of animosity to remain in the region, not toward the U.S. administration and not toward the West," Prime Minister Ismail Haniyeh told The Associated Press in an interview earlier this month.

And Hamad, the Hamas spokesman, insisted "we are not against political compromise, and we are not against building a state in the '67 borders," meaning he would accept statehood in the West Bank, Gaza and east Jerusalem, forgoing Hamas' claim to all of Israel. Israel captured those areas in the 1967 Middle East war.

Abbas has called for an immediate resumption of peace talks between himself and Israel. But a new government in Israel headed by interim Prime Minister Ehud Olmert is not likely to accede to talks with a Palestinian Authority run by Hamas.

Israel has already cut off contacts with the Palestinian Authority, and these days the relationship between the two peoples can be summed up by the daily barrage of Palestinian rockets — tolerated though not fired by Hamas — and Israeli artillery shelling across the Gaza border. 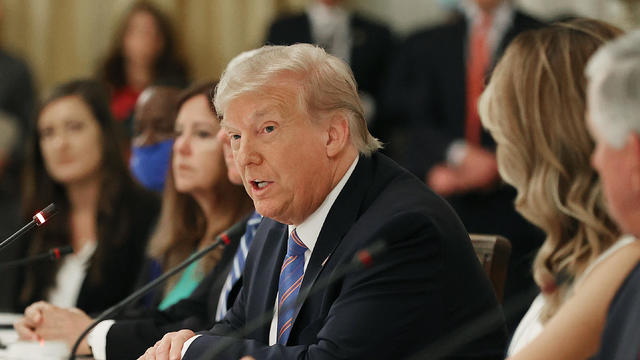