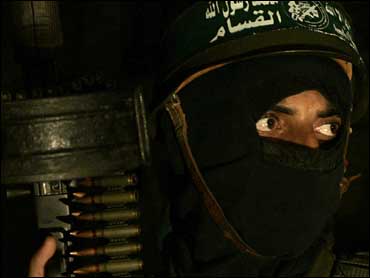 Hamas called on Sunday for a cease-fire with Israel, a possible indication of the growing pressure the Islamic group faces after months of isolation in the Gaza Strip.

Gaza's Hamas government "is ready to offer a truce at this time," Mohammed Awad, a senior Hamas official, told a Gaza Web site affiliated with the Islamic group. Awad's office confirmed he had made the statement, which echoed similar calls by Hamas in recent months.

An Israeli government spokesman dismissed Awad's statement as a "ploy."

Gaza has been cut off from the rest of the world since Hamas took it over violently in June. Awad said the truce would only be possible if it helped "to achieve some goals for our people" - likely meaning moves to open sealed border crossings into Israel and Egypt, relieve international economic sanctions and halt Israeli army operations against Palestinian rocket squads.

The Arabic word Awad used, "hudna," denotes a temporary cease-fire rather than a permanent peace. Hamas does not recognize Israel's right to exist and is considered a terrorist organization by Israel, the U.S. and EU.

"We've seen Hamas and other terror organizations use these calls for a cease-fire as a mere ploy in order to allow them to rearm, regroup and reorganize," Baker said. "Israel will continue to take the necessary steps to defend its citizens and will not sit idly by while these terrorist organizations continue to actively plan and eventually perpetrate terror attacks against us."

Palestinian militants launch rockets almost daily at Israeli towns from Gaza, and Hamas has done nothing to halt the fire. Israel's military raids and air strikes have failed to halt the projectiles.

In mid-September, the Israeli government declared Gaza a "hostile territory" in an effort to ratchet up pressure to stop the rockets. The classification set the stage for a possible cutoff of electricity to the impoverished territory of 1.4 million people, but no such cutoff has been carried out.