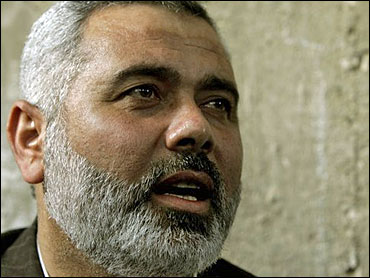 The Islamic militant group Hamas said Thursday it is ready to restore its cease-fire with Israel several days after calling it off to protest a deadly explosion on a Gaza beach.

But Ghazi Hamad, spokesman for the Hamas-led Palestinian government, said the offer was conditional on Israel accepting the Palestinians' demand "to stop their aggression."

"This is very clear for us. We are interested to keep the situation and quit, especially in the Gaza Strip," Hamad said. "We are ready to do it, but (only) if the Israeli side has a strong intention to respond positively to the call ... to stop their aggression."

The Islamic Jihad militant group, which has never accepted the truce, fired five rockets toward Israel on Thursday.

Hamas, which opposes the existence of Israel, has killed hundreds of Israelis in 4½ years of violence.

Foreign Minister Mahmoud Zahar arrived with $20 million on Wednesday. That money also was transferred to the Finance Ministry.

Western donors and Israel have cut off hundreds of millions of dollars of financial transfers to the Palestinians since Hamas won legislative elections earlier this year. They want Hamas to renounce violence and recognize Israel's right to exist.

Hamas has refused the demands, despite being unable to pay the salaries to virtually all of the government's civil servants for the past three months. Instead, it has turned to Arab and Muslim countries for help.

Hamas officials said the money Zahar brought came from "donations" but did not provide a source. Zahar had been to Indonesia, Malaysia, Brunei, China, Pakistan, Iran and Egypt.

Rizka was returning from a trip to Egypt, Qatar and Saudi Arabia.

Dozens of Palestinian civil servants stormed a parliamentary session on Wednesday to demand long-overdue salaries, attacking Hamas lawmakers and forcing the parliament speaker to flee the building. No injuries were reported.

Officials have said they expect the money to go to workers' salaries. Observers believe the money will be used to finance Hamas private militias and not salaries, reports Berger.

Olmert wraps up two days of talks with French leaders Thursday, leaving with mutual declarations of affection but no endorsement for his plan to set Israel's borders with the Palestinians unilaterally if peace talks stay stalled.

Olmert makes similar entreaties for emigration to Jewish communities in other countries, but the subject is particularly sensitive in France, where fears of anti-Semitism resurfaced this year after the kidnapping and brutal killing of a young Jewish man.