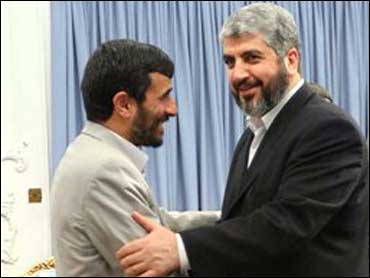 Iran on Sunday said it would give the Palestinian Authority $50 million in aid, moving in as the United States and Europe have withheld funding to the Hamas-led government.

Iranian Foreign Minister Manouchehr Mottaki announced the aid package during a conference held in Tehran in support of the Palestinians.

The pledge came as the Palestinian government led by the Islamic movement Hamas began to seek funding from Islamic countries after Arab governments failed to make good on promises for funds.

Israel, the United States and the European Union require Hamas, which they consider a terrorist organization, to renounce violence and recognize the Jewish state to obtain funding.

But Hamas' political leader Khaled Mashaal reiterated the group's refusal to meet those demands, saying Saturday in Tehran that his government would "never recognize Israel."

Iran is also under international pressure to change its ways. The United States and Europe question Iran's motives for enriching uranium, which can be used for peaceful purposes or nuclear weapons. Tehran claims that the aim of its program is to generate electricity.

Mottaki said the pledge was based a long-standing policy to support the Palestinians, Iranian state-television reported.

"Cutting the West's financial aid to Palestine would not affect the will of the Palestinian people," he was quoted as saying.

Sunday's announcement was the first time Iran announced a specific sum for the Palestinians. Previously, it said it would provide the government funding to compensate the PA for the West's withdrawal of funding.

In a memo obtained by The Associated Press, the U.S. Treasury Department said "transactions with the Palestinian Authority by U.S. persons are prohibited, unless licensed." It said the decision was based on "existing terrorism sanctions."

Meanwhile, Palestinian Prime Minister Ismail Haniyeh on Sunday called an emergency meeting with rival Palestinian factions amid rising tensions between the groups and a spike in violence with Israel.

The infighting, along with an Israeli offensive in the northern Gaza Strip, has compounded the troubles of Haniyeh's fledgling government, which is coping with a financial crisis that has left it broke and unable to pay the salaries of its thousands of workers.

Representatives of Abbas' Fatah movement and Islamic Jihad, a small group responsible for much of the violence with Israel, were expected to participate in Sunday's midday meeting. But Fatah officials did not show up. Officials were not immediately available for comment.

Ahead of the meeting, Islamic Jihad's exiled leader, Ramadan Shallah, rejected calls to halt attacks. Speaking during a conference in Iran, Shallah said rocket fire and suicide attacks would continue.

"Firing rockets will continue," he said in a statement posted on the group's Web site. He also said his group is making "nonstop efforts" to infiltrate suicide bombers from the West Bank into Israel. He said an Israeli military crackdown "might limit this effort, but it's not going to stop it."

Israel has stepped up an offensive in the northern Gaza Strip, firing artillery shells and carrying out airstrikes to halt rocket attacks aimed at Israeli towns. At least 16 Palestinians, including 13 militants and a young girl, have been killed. No Israelis have died in the rocket fire.

Hamas, which has honored a yearlong cease-fire with Israel, has not participated in the attacks. But sworn to Israel's destruction, it has done little to stop them.

Since taking office two weeks ago, Hamas has come under intense international pressure to renounce violence and recognize Israel's right to exist. Western donors have cut off tens of millions of dollars in direct aid, and Israel has suspended the monthly transfer of tax it collects for the Palestinians.

Despite the financial crisis, Hamas has refused to moderate its ideology. On Friday, Haniyeh accused Abbas of forming "an unholy alliance" with the international community to weaken Hamas.

The moves prompted Haniyeh to declare Friday that he is not a "puppet." Fatah officials, in turn, accuse the new leadership of sidelining and punishing Fatah officials in government positions.

Ahmad Abderahman, a Fatah spokesman, said Sunday that Hamas is responsible for the Palestinians' problems and urged the group to accept Abbas' goal of restarting peace talks with Israel. He called on Hamas to accept previous peace deals with Israel reached over the past decade.

"Hamas is blaming President Mahmoud Abbas, but it should not blame anyone but itself," he said. "Hamas needs to review its positions as soon as possible. Without doing so, the crisis will worsen."

Hamas has rejected the international community's calls to renounce violence and recognize past peace agreements. Instead, it has sent top officials on a tour of the Arab and Muslim world in hopes of raising enough money to keep the government afloat.

But time may be running out. In the first major sign of discontent with the Hamas-led government, dozens of masked Palestinian police officers on Saturday blocked a main road in the Gaza Strip and briefly seized a government building to protest the delay in paying their salaries.