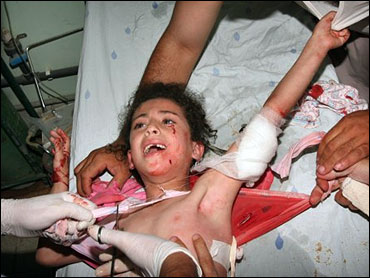 "The earthquake in the Zionist towns will start again," said a leaflet distributed at a Hamas rally Friday night. "The resistance groups ... will choose the proper place and time for the tough, strong and unique response."

Israel and the Palestinians declared the truce in February 2005. Hamas, which has killed scores of Israelis in suicide bombings, has largely abided by the cease-fire.

Friday's attack fueled anger spawned by a fatal Israeli airstrike Thursday on a top militant commander in the Hamas-led government. Tens of thousands of people, including angry militants defiantly shooting in the air, packed a southern Gaza soccer stadium for the man's funeral.

In the West Bank, Palestinian President Mahmoud Abbas condemned what he called a "bloody massacre" in Gaza and called on the international community, including the United States, Europe and the U.N. Security Council, to intervene.

The Palestinian president declared a three-day mourning period and said embassies around the world would be closed and flags would fly at half staff.

Abbas, a moderate who leads Fatah, is eager to restart long-stalled peace talks with Israel, and was expected Saturday to formally announce a July 31 date for a national referendum on establishing a Palestinian state alongside Israel.

Hamas Prime Minister Ismail Haniyeh sent a letter to Abbas on Friday urging him not to hold the vote and to continue negotiations over the plan. He said the referendum would divide the Palestinian people and instead proposed forming a national unity government with Fatah.

"The idea of the referendum now on the table carries many dangers," Haniyeh wrote. "I'm afraid it will cause a historic rift that will hurt the Palestinian cause for decades to come."

The army said it was shelling areas where rockets had been fired at Israel, reports CBS News correspondent Robert Berger. But one artillery strike appeared to go dramatically off course.

The shells struck a crowd at a beachside picnic, killing seven and wounding more than 30, Palestinian Health Minister Bassem Naim said. A woman and two children younger than 2 were among the dead, medical officials said. All the dead were believed to be related.

The barrage destroyed a tent and scattered body parts along the beach. A panicked crowd screamed and ran around in confusion as paramedics carried the bodies away.

The death toll in Gaza was the highest since Hamas took office in March after winning legislative elections.

Sami Abu Zuhri, a Hamas spokesman in Gaza, said the attack showed "the Zionist occupation ... does not distinguish between civilian children and freedom fighters."