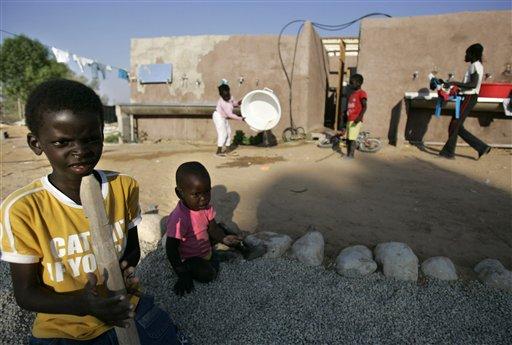 Hamas has no plans to attack American targets, the group's new leader said Wednesday, backing off earlier threats against Washington following Israel's assassination of its founder, but Israeli leaders are in the group's crosshairs.

Rantisi was named the new leader of Hamas in its Gaza Strip stronghold on Tuesday. The group's overall leader, Khaled Mashaal, heads its political bureau in Damascus, Syria.

Mashaal was quoted Wednesday as saying that Israeli Prime Minister Ariel Sharon is a target for assassination himself.

Mashaal reportedly told the London-based pan-Arab al-Hayat newspaper "Since the enemy has targeted our leadership... and a big symbol like Sheikh Ahmed Yassin, it is the right of the resistance to respond against the big Zionist heads."

He named Sharon in similar comments to the German DPA news agency.

Hamas also has distributed playing cards with the names of Israeli officials who would be targeted, similar to the card decks of pre-war Iraqi officials issued by the United States, the Haaretz newspaper reported.

The Israeli army said early Wednesday that the two Palestinian militants were killed while trying to infiltrate the Gaza Strip settlement of Morag. Troops also confiscated a bag full of explosives.

The men were dressed in camouflage and flak jackets and were armed with assault rifles, the army said. Hamas claimed responsibility for the failed attack.

Rantissi is promising to send waves of suicide bombers to strike at Israelis everywhere.

"It's impossible for us to accept surrender," he said.

Middle East analyst Michael Oren said Hamas has already tried to blow up skyscrapers and carry out large attacks, so he supported the assassination of Yassin.

"Had they succeeded in doing that, hundreds and maybe thousands of Israelis might have died," he told CBS News Correspondent Robert Berger. With 120 suicide attacks in the past 3½ years, "how much worse can it get?"

Hamas had issued veiled threats against the United States — something it rarely does — after the death of Sheik Ahmed Yassin in an Israeli air strike on Monday.

It issued a statement saying America's backing of Israel made the assassination possible. "All the Muslims of the world will be honored to join in on the retaliation for this crime," Hamas said in a statement.

President Bush said after the statement that the United States takes the threat seriously.

Rantisi is a well-known public figure who often appears on television, speaking in fluent English, praising suicide bombers and calling for the destruction of Israel, reports Berger. Israel tried to assassinate 54-year-old pediatrician last June, and has made it clear it will try again.

Israel holds Hamas responsible for the deaths of hundreds of people in suicide bombings and has marked the group's entire leadership for death.

Rantisi said Wednesday that he is not afraid of the death threats.

The army said it had removed some brush and two abandoned buildings that were used to fire on settlements. It said troops opened fire after being attacked by an anti-tank missile and gunfire. No casualties on either side were reported.

On Wednesday, the Israeli Foreign Ministry withdrew diplomats and their families from missions in the Arab countries of Qatar and Mauritania. The ministry said the decision was precautionary and it had not received any specific threats.

Israel's accelerated strikes at Hamas are part of an attempt to score a decisive victory ahead of an Israeli withdrawal from Gaza. Israel does not want to be seen as being driven out of the strip by militants, who are already claiming victory.

Israeli Foreign Minister Silvan Shalom was in Washington this week to discuss the withdrawal plan.

Shalom told Army Radio on Wednesday that the United States had been cool to the Israeli idea of recognizing some Israeli settlements in the West Bank in return for the Gaza pullback. Several top leaders have said they would only support the pullback if the United States offers something in return.