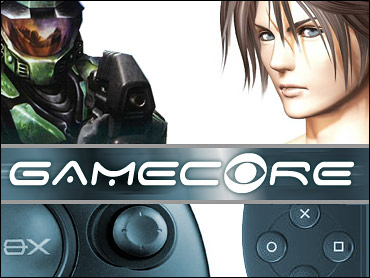 Game Core is a weekly column by CBSNews.com's William Vitka that will be bringing you the latest and greatest in video games. Vitka went to Times Square for the midnight release of "Halo 2."

If you were a non-gamer, someone who had never heard of "Halo", Bungie Studios, Xbox or a guy named the Master Chief, you would have probably been curious about the hundreds of people coiled around the block in front of a Toys R Us in chilly Times Square.

As fans, we had waited three years, ever since we'd put our controllers down and watched the ending credits of the first "Halo," for the continuation of the series.

"It's the biggest and most anticipated game of all time," said Mark Clark of Microsoft. He wasn't kidding. It's getting ready to be shipped to 27 countries in eight different languages and the game sold over 1.5 million units in pre-order. At $50 a unit, the game made $75 million before it was even released.

These kinds of numbers would make any Hollywood studio mogul green with envy. (The animated hit movie "The Incredibles" grossed $70.7 million in its first weekend.)

Five million copies of the original "Halo" were sold, and game has invaded many aspects of pop culture. Celebrities like Justin Timberlake, Michelle Rodriguez, Julia Roberts and the boys of Linkin Park are fans.

"Halo 2" puts the player in the role of a genetically enhanced super soldier named Master Chief. He is the only thing standing between an evil force of aliens called the Covenant and the destruction of mankind.

One of the hundreds of gamers who lined up to buy "Halo 2" in Times Square was fan dressed as the Master Chief. His armor was a nearly perfect replica of the character, and he brandished the Red Flag from the "Halo" universe, itself adorned with a lovely grinning skull on the top.

This Master Chief jaywalked straight across Broadway, waving his flag to the cheers of fans and doing his best to annoy cab drivers who couldn't figure out what was going on.

"It's unbelievable, the love that Halo 2 brings out in people," "Master Chief" told me.

There was indeed a feeling of community among the hundreds of shivering fans waiting to buy the game, though I hesitate to use the word "love."

There were also feelings of fear and apprehension. The possibility that the store wouldn't have enough copies of the game was something that flat out terrified us. This story, however, has a happy ending. Everybody was able to purchase the game.

After buying "Halo 2," I was lucky enough to be able to shadow some of the guys from XS Games -- responsible for the underappreciated "Syberia 2" -- and partake in some good old-fashioned LAN deathmatches where each player is set loose in an arena and racks up points by killing his opponents. After a few hours of that, I can tell you that "Halo 2" is a must-have. The multiplayer alone is worth the purchase.

The graphics are stunning. The detail is mind-boggling. You haven't seen more beautifully crafted models, explosions and bullet holes on a console and you've never really played a game like this, but that isn't what's at the heart of "Halo 2."

It's the experience. The fun.

It's sitting next to friends and mowing them down – with love, maybe? – with an SMG in one hand and a Covenant plasma rifle in the other, screaming at their defeat, hearing them slam their controller down and colorfully connect strings of curses and vulgarities. Thanks to Xbox Live, you can do that with people across the globe and hear them smack talk in new languages via the included headset.

The community is there, a planet of gamers who want to have fun and maybe run you over with a vehicle during a multiplayer match.