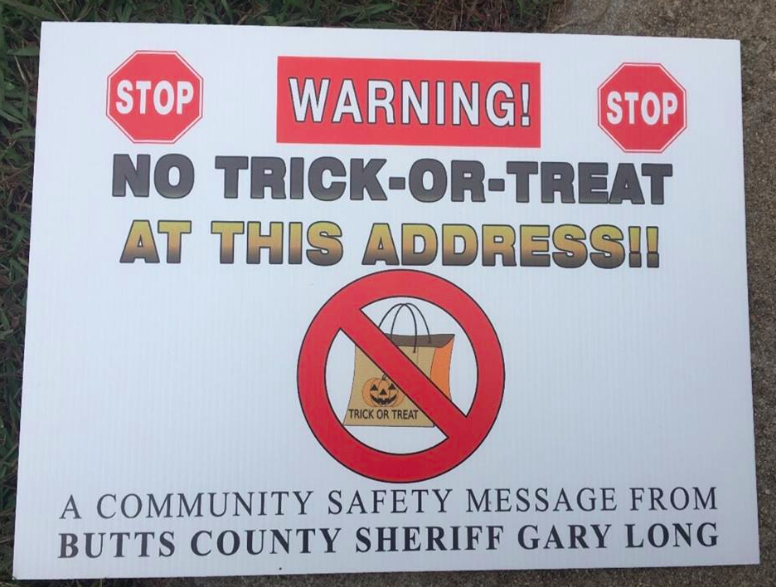 The sheriff's office of Butts County, Georgia, wants to ensure that kids celebrating Halloween will be safe while collecting candy. So this year, the office is taking an extra precaution: -- posting "no-trick-or-treat" signs in the yards of registered sex offenders.

"I'm not trying to humiliate 'em or anything like that. Let's face reality: We have a greater chance of children getting run over by a car [on Halloween] than being a victim of sexual assault by a repeat offender," says Sheriff Gary Long. "But at the end of the day if, in fact, we had a child that fell victim to a sexual assault, especially by a convicted sex offender, I don't think I could sleep at night."

Long told CBS News there are 54 registered sex offenders in Butts County. He and his deputies began placing the signs on the edges of the offenders' yards Saturday and each one now has one.

The signs read "Warning! No trick-or-treat at this address!! A community safety message from Butts County Sheriff Gary Long. They include graphics of stop signs and a Halloween bag with a large caution sign over it.

The Sheriff wrote the signs were placed "in accordance with Georgia Law O.C.G.A. 42-1-12-i(5)," in a post on the Butts County Sheriff's Office Facebook page Saturday. The Georgia Bureau of Investigations website says the law says, "The sheriff's office in each county shall: Inform the public of the presence of sexual offenders in each community."

In previous years, Long said, his deputies have visited the offenders, completed the mandatory compliance checks a few weeks before Halloween and placed a sign on the door warning trick-or-treaters about the residents. But this year, the second-term Sheriff wanted to increase visibility -- due to a change in Halloween night programming.

In the past, the sheriff told CBS News, there was a large trick-or-treating event in the town square, where local businesses, the police and fire departments would hand out candy to the kids. Long says 2,500 to 4,000 children attended the event each year. The program was canceled this year, and thousands of kids will be trick-or-treating the old fashioned way: house-to-house.

While Long says most of the sex offenders "understood," he did receive a few emails from offenders saying the signs were an "embarrassment."

"At the end of the day, I don't care if they do like it or if they don't like it. My job us to ensure the safety of the children and the community and that's what I'm going to do," Long told CBS News., adding that he's received positive feedback from some parents and community members about the signs.

Long said deputies would remove the signs by Thursday morning.