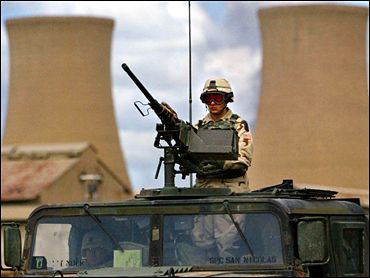 The Army has given a Halliburton Co. subsidiary more than $425 million in troop support work related to the Iraqi war in the past 14 months, using an exclusive contract that Vice President Dick Cheney's former company won in 2001.

The previously undisclosed work, awarded without competitive bids, is in addition to the $71.3 million that Halliburton's subsidiary, Kellogg Brown & Root, has received from the Army Corps of Engineers in no-bid contracts to repair and operate oil wells in Iraq.

Rep. Henry Waxman, D-Calif., who disclosed the troop support work orders Thursday, said the structure of exclusive contract means that "the amount that Halliburton could receive in the future is virtually limitless."

"It appears that many, if not all, the task orders under the contract were awarded without any competition," Waxman said in a letter to Acting Army Secretary Les Brownlee. "This type of arrangement poses inherent risks to taxpayers ... It is unclear what safeguards, if any the Army is using to prevent excessive charges to the government."

Brown & Root competed with two other companies to win the logistics contract that makes it the Army's only private supplier of troop support services over the next decade. There is no ceiling on spending, because the contract is designed to provide rapid troop support wherever and whenever U.S. forces move into action overseas.

Dan Carlson, spokesman for the Army Field Support Command, said the Army has paid $42 million to Brown & Root through April for work under the contract related to Iraq and Afghanistan.

Carlson said the more than $500 million in work orders represents the Army's best estimate of the final costs of the projects. He said Brown & Root must justify its spending to Army contract officials before it can be paid.

"Costs are verified as they are billed," he said. "We may spend more or we may spend less."

In January, the Army obligated $60 million to Brown & Root to provide logistical supply line services and locations in Turkey. But because the Turkish government refused to allow U.S. troops to launch an invasion of Iraq from Turkey, much of that obligation was not spent, Carlson said.

Waxman asked Brownlee to explain what actions and procedures the Army has taken to ensure that it will not be hit with cost overruns like those identified by the General Accounting Office when Brown & Root had a similar exclusive troop support contract for the U.S. military action in Bosnia in 1997.