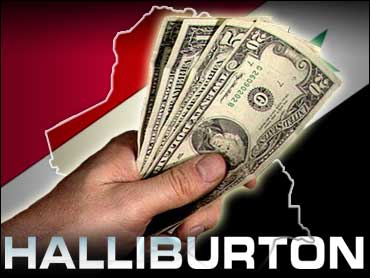 Halliburton will pay the Pentagon $6.3 million for possible overcharges by a subcontractor that is accused of giving kickbacks to supply U.S. soldiers in Iraq, a spokeswoman said Friday in new trouble for Vice President Dick Cheney's former company.

"We will bear the cost of the overcharge — not the federal government," said Wendy Hally.

Halliburton fired the employees involved and notified Defense Department investigators when it discovered one or two workers may have gotten improper payments from the Kuwaiti firm, Hall said. She said the company was paying the $6.3 million to the Army Materiel Command to cover any possible overcharges while the Pentagon investigates.

"We found it quickly, and we immediately reported it," Hall said. "We do not tolerate this kind of behavior by anyone at any level in any Halliburton company."

The Pentagon already has in progress a criminal inquiry into possible overcharging involving another Halliburton contract: the company's deal to supply gasoline to Iraqi civilians. Democrats have criticized the contracts and demanded further investigations; the company has denied wrongdoing.

Meanwhile, Halliburton has begun an advertising campaign to improve its image. A television spot running on CNN says Halliburton supplies hot meals, laundry and telephone links for soldiers in Iraq. The ad shows a man in desert camouflage holding a phone, his lip trembling, and shouting, "It's a girl!"

"Halliburton. Proud to serve our troops," an announcer says.

"Halliburton gets beaten up every day by people who don't have the facts. We can stand the heat, ... but we will tell our story," Hall said. "Our employees are doing great work in Iraq making life better for our troops and for the Iraqi people."

In the latest investigation, Halliburton auditors found a $6 million overcharge by a Kuwaiti subcontractor in its Army supply contract, Hall said Friday. Part of that money may have been paid as kickbacks to one or two Halliburton workers, she said.

Hall did not identify the workers or the Kuwaiti subcontractor. She also did not say how large the alleged kickbacks were.

White House press secretary Scott McClellan said Friday it was up to the Pentagon to determine if wrongdoing occurred.

Both investigations involve Halliburton subsidiary KBR, which has a contract to supply the Army with food service, mail and other amenities and a separate one to rebuild Iraqi oil facilities.

Pentagon auditors found KBR may have overcharged by $61 million for deliveries of gasoline from Kuwait to Iraq from May through September. KBR's Kuwaiti supplier, the Altanmia Marketing Co., charged more than twice what suppliers in Turkey did.

Both Halliburton and the Army Corps of Engineers, which oversees the fuel contract, say the higher price was justified by the danger faced by fuel convoys and the need to head off Iraqi anger over gasoline shortages.

The deal to deliver gasoline to Iraqis is part of that second contract, while the alleged kickbacks were for the Army supply contract.

The kickback probe is the first admission by Halliburton that its employees may have been involved in corruption involving contracts in Iraq.

The company disclosed last year that another KBR employee paid more than $2 million in bribes to a Nigerian official to get favorable tax treatment. A French judge investigating a KBR joint venture in Nigeria with a French firm has reportedly warned that Cheney, who headed Halliburton from 1995 until 2000, could be subject to criminal charges in France. Cheney has denied wrongdoing.

Democrats renewed on Friday their criticism of Halliburton and their demands for further investigations into the company's contracts.

"All of Halliburton's contracts with the government need to be terminated," said Sen. Frank Lautenberg, D-N.J. "This is a fatal blow to the company's credibility and the administration's ability to defend these contracts."

White House spokesman McClellan dismissed Democratic suggestions that the controversy surrounding Halliburton casts a cloud over the Bush administration's reconstruction of Iraq. "There's obviously a lot of election-year politicking going on," he said.