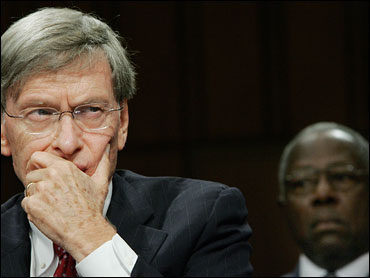 Invited by Selig to appear at a Senate Commerce Committee hearing on steroids in sports, former star players Aaron, Ryne Sandberg, Phil Niekro, Robin Roberts and Lou Brock were not on the witness list. But Sen. John McCain, R-Ariz., who ran the hearing, asked them to speak before the testimony of Selig and the commissioners and union leaders of four major professional sports leagues.

"I want to applaud the commissioner, and I also just want to make sure that whatever we do, we make sure that we clean up baseball," said Aaron, whose record of 755 homers is being approached by San Francisco Giants slugger Barry Bonds.

Sandberg, who addressed steroids during his Hall of Fame induction speech in July, told the Senators: "We here today owe America's pastime a strict policy."

Fehr, baseball commissioner Bud Selig and officials from the National Football League, National Basketball Association and National Hockey League were called before the Senate Commerce Committee to discuss two proposed Senate bills that would standardize drug policies across sports. Three similar bills have been introduced in the House.

The focus during the two-hour hearing, though, was on baseball, much as has been the case since the House Government Reform Committee grilled Mark McGwire, Rafael Palmeiro, Selig, Fehr and others about steroids on March 17. Palmeiro, who emphatically told Congress that day he had never used steroids, was suspended Aug. 1 after failing a drug test.

McCain wanted to know why the process has moved so slowly, asking Fehr repeatedly: "Don't you get it?"

Pressed for a deadline for an agreement, Fehr said: "Can I give you a precise date? No. Would I expect it to be by the end of the World Series? I would certainly hope so."

The World Series is scheduled to begin Oct. 22 and end no later than Oct. 30. Asked if that's possible, Selig said: "I hope we can. This has been a long journey. ... I don't see that we have a choice."

In April, Selig called for a 50-game suspension after an initial positive test, a 100-game ban for second-time offenders and a lifetime ban for a third violation. Currently, a first offense carries a 10-day ban. Fehr offered Monday to accept a 20-game penalty for first-time steroid offenders.

"We believe that we've made a lot of strides ... and we are prepared to do a lot more," Fehr testified Wednesday, adding later: "I think we're very close to an agreement. I'll be surprised if we can't work it out."

Selig acknowledged that "baseball presently has a problem," adding, "It is my goal ... to eradicate the use of performance-enhancing substances from the game and I will not leave one stone unturned until this happens."

"There are some who will say Congress has no business in this issue," McCain said. "But ... professional sports have not acted, and we have an obligation to our young people."

Baseball, Bunning said, "seems to be the biggest problem."

Both Senate bills call for a two-year suspension the first time an athlete fails a drug test and a lifetime ban after a second failed test. The four leagues whose officials appeared Wednesday have less strict penalties, though all have toughened or proposed toughening their programs in recent months — in some cases, right before or after congressional hearings on the subject.

"For whatever reason, you just can't get it done, and you can't get your act together," Bunning said. "I and millions of fans think that's pathetic."

He has said he expects legislation to reach the floor of Congress before the end of the year, and on Wednesday, Bunning spoke of being, "on the brink of possibly passing legislation."