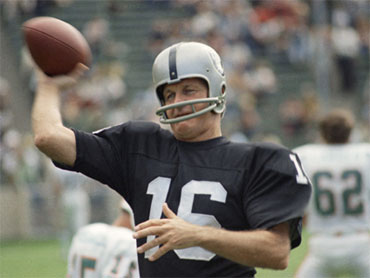 George Blanda, the seemingly ageless Hall of Fame quarterback and kicker whose 26-year career was best remembered for a remarkable run of late-game theatrics with the Oakland Raiders, has died. He was 83.

The Raiders confirmed the death Monday and issued a statement saying "we are deeply saddened by the passing of the great George Blanda. George was a brave Raider and a close personal friend of Raiders owner Al Davis."

Blanda retired a month shy of his 49th birthday before the 1976 season, playing longer than anyone else in pro football history. He spent 10 seasons with the Chicago Bears, part of one with the Baltimore Colts, seven with the Houston Oilers and his final nine with the Raiders.

He scored 2,002 points in his career, a pro football record at the time of his retirement, kicking 335 field goals and 943 extra points, running for nine touchdowns and throwing for 236 more.

But it was a five-game stretch for Oakland in 1970 that is the lasting imprint from his career. As a 43-year-old, Blanda led the Raiders to four wins and one tie with late touchdown passes or field goals.

Later that season, he became the oldest quarterback to play in a championship game, throwing two touchdown passes and kicking a field goal in Oakland's 27-17 loss to Baltimore in the AFC title game. His performance that season earned him The Associated Press Male Athlete of the Year.

He nearly won a third straight title when he led the Oilers back from a 17-0 halftime deficit to the Dallas Texans in the 1962 title game before losing in double overtime.

"George Blanda will always be remembered as a legend of our game," NFL Commissioner Roger Goodell said in a statement, "including his amazing career longevity of 26 seasons in four different decades. George's multi-talented flair for the dramatic highlighted the excitement of pro football during an important period of growth for our sport."

Blanda began his memorable run in 1970 by throwing three touchdown passes in place of an injured Daryle Lamonica in a 31-14 win over Pittsburgh on Oct. 25. The following week he kicked a 48-yard field goal in the final seconds to give the Raiders a 17-17 tie against Kansas City.

Blanda was just getting started. He threw a tying touchdown pass with 1:34 remaining and then kicked the game-winning 52-yard field goal in the final seconds the following week in a 23-20 win over Cleveland.

He followed that with a 20-yard TD pass to Fred Biletnikoff in place of Lamonica in a 24-19 victory over Denver the next week, then kicked a 16-yard field goal in the closing seconds to beat San Diego 20-17 on Nov. 22.

"The game that I remember the most was playing against Cleveland in 1970," he once said. "We were down 20-13 and I came in and we got a touchdown and then we got a field goal in the last three seconds."

Blanda entered the NFL out of Kentucky as a 12th-round pick (119th overall) of the Chicago Bears in 1949. He spent most of the next decade with the Bears, leaving to play one game for the Colts in 1950. After winning the Bears starting job in 1953, Blanda promptly lost it the following season because of injury. His playing time at quarterback quickly diminished and he retired in 1959 at age 31 when Chicago planned to make him a full-time kicker. It was a short-lived break because he then joined the AFL's Oilers the nest season.

Blanda was one of the new league's many prolific passers, throwing for 19,149 yards and 165 touchdowns in seven seasons for the Oilers. He was the AFL Player of the Year in 1961, holds AFL single-game passing record of 464 yards on Oct. 29, 1961, against Buffalo, and was chosen the league's all-time kicker.

"We did all the strategy right on the field," he once said. "Today, the coaches call all the plays, so all the quarterbacks have to do is perform. They are more or less programmed."

The Oilers thought he was at the end of his career in 1967, but the Raiders picked him up as a backup quarterback and kicker and he lasted nine more seasons.

Blanda threw for 26,920 yards in his career and held the pro football record with 277 interceptions until Brett Favre passed him in 2007. He retired with the most points in history before the total was topped by several players in recent years.

"It certainly doesn't bother me," Blanda said about losing the scoring record. "The one record I was happy to get rid of was the one for the most interceptions, when Brett Favre got that one."