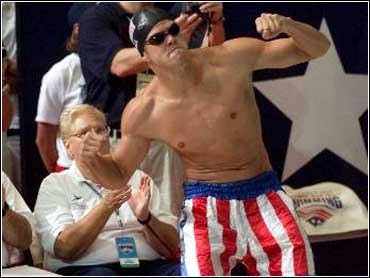 Gary Hall Jr. arrived at the pool in a fighting mood. After stripping off a black hooded robe to reveal a pair of red, white and blue boxing trunks, he pierced the air with phantom punches.

The flamboyant Hall, overcoming diabetes and a drug suspension, earned another chance to show he's the world's fastest swimmer by finishing second to Neil Walker in the 100-meter freestyle at the U.S. Olympic trials Sunday night.

"I'm really stoked to be going to Sydney," Hall said.

His father, a three-time Olympian, fired up the crowd at the start of the evening by waving an American flag and leading a chant of "USA! USA! USA!" Hall tried to outdo his old man, strolling on deck wearing a patriotic pair of trunks that he bought at a charity event for Muhammad Ali.

"I wanted to bring them out for a special occasion, and tonight was the night," the younger Hall said. "I really don't think I'm a showman. I just like to be me."

Walker set a blistering pace over the first 50 meters, making the turn more than a half-second under the world record. The 24-year-old from Austin, Texas, faded on the return lap but held on to win in 48.71 seconds.

Hall, closing fast, took second in 48.84 to claim the other Olympic berth and a spot on the 400 relay team as well.

"Anytime you're going to race against the Australians, it's going to be a close race," Hall said. "But I believe this relay team is the greatest relay team ever assembled, and I look forward to going for a world record."

Ed Moses won't get a chance to go for a breaststroke double in Sydney. He was the victim of a shocking upset in the 200 final, finishing fourth in a race won by Kyle Salyards, 19, of Tempe, Ariz.

Tom Wilkens of Palo Alto, Calif., provided one of the night's highlights by finishing second behind Salyards, earning the other Olympic berth.

Wilkens was expected to make the team in the 400 individual medley but faded to third behind Tom Dolan and Erik Vendt. In the breaststroke, he came through in a thrilling race in which only 0.32 seconds separated the top four finishers.

Wilkens pumped his fist when he saw his name under Salyards' winning time of 2:13.21. The second-place finisher touched in 2:13.34, edging Brendan Hansen's 2:13.49. After crawling from the pool, Wilkens was overcome by emotion, sitting on the deck with his hands covering his face.

"Things happen in strange ways," he said. "It wasn't pretty, but it got me on the team. You don't have to be the best looking."

Moses, already on the team after winning the 100 breaststroke, touched fourth in 2:13.53.

The versatile Walker missed the Olympic team by one-hundredth of a second in 1996. He's atoned for his dsappointment at these trials.

"It really wasn't a negative experience now that I look back on it," said Walker, who already earned a spot on the team by placing second in the 100 backstroke. "I turned it into positive motivation."

Hall, 25, won silver in the 50 and 100 freestyle at the 1996 Atlanta Games, but his life has been troubled since then. He was suspended for three months in 1998 after testing positive for marijuana, then learned last year he has diabetes.

The Phoenix resident didn't earn a qualifying time for the trials until a month ago and often has to give himself up to eight insulin shots a day to cope with his disease.

Sabir Muhammad missed out becoming the first black to make the U.S. Olympic swim team. He finished last in the eight-man final, but will get another chance in his best event, the 50 freestyle.

However, Anthony Ervin of Valencia, Calif., considers himself of black heritage. Ervin, whose father is 75 percent black and mother is white, earned a spot on the 400 free relay after finishing fifth in the 100.

Misty Hyman of Phoenix won't have to compete in the shadow of teammates Dara Torres and Jenny Thompson any longer. Hyman, edged out for an Olympic spot in 1996, made a name for herself by holding off hard-charging Kaitlin Sandeno to win the 200 butterfly.

Hyman, 21, touched the wall in 2:09.27, while Sandeno took the second Olympic spot in 2:09.54 with no one else within two seconds. Sandeno already had made the team in the 400 individual medley, anyway.

Thompson and Torres are swimming in a league of their own among the female sprinters. They set up another showdown in the 100 freestyle by breezing into Monday's final as top qualifiers.

Torres, 33, went fastest in the morning preliminaries, while Thompson came back to lead the evening semifinals in 54.41. Torres was second in 54.92 the only other swimmer to eclipse the 55-second barrier.

Torres, edged by Thompson in a stirring 100 butterfly on Thursday, has made a remarkable comeback after retiring for seven years. But another 33-year-old former Olympian didn't fare as well.

Angel Martino of Milledgeville, Ga., a six-time medalist, hoped to make the freestyle relay team after having a baby three years ago. But her comeback may have ended when she failed to qualify for the 100 free final, finishing 11th out of 16 semifinalists.

"I felt like an underdog. But I certainly thought I'd be on that relay," said Martino, who probably won't take one last shot in the 50 freestyle.

Amy Van Dyken, who in 1996 became the first American woman to win four gold medals in an Olympics, was fourth-fastest qualifier at 55.37. The 27-year-old is coming back from two shoulder surgeries in the last two years.

World record-holder Lenny Krayzelburg and 17-year-old Aaron Peirsol of Irvine, Calif., breezed into Monday's final of the 200 backstroke. Kristy Kowal of Athens, Ga.bouncing back from the disappointment of finishing third in the 100 breaststroke, dominated the 200 breast semis. Wilkens came back in his second event of the night, the 200 IM, to post the second-fastest time of the semifinals behind Dolan.