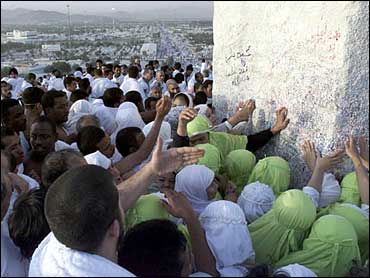 Nearly 2 million Muslim pilgrims converged on Mt. Arafat on Monday for a solemn prayer ritual that is the highlight of the hajj, a centuries-old pilgrimage to the birthplace of Islam.

After dawn prayers at the nearby valley of Mina, where most pilgrims spent the night in white fireproof tents, they began the short trek to Arafat, a gentle plateau from which a small and rocky hill known as the Mountain of Mercy rises.

Singing the pilgrim chant "At Thy service, my God, at Thy Service," they reached Arafat on foot, in buses and even clinging to the roofs of vehicles.

By midmorning, as helicopters hovered overhead and police tried to keep order on the ground, the arid plateau turned into an ocean of pilgrims, with men dressed in identical seamless white garb, and women entirely covered — with only their hands and faces visible.

Every able-bodied Muslim who can afford it is required to perform the hajj at least once in a lifetime.

The annual ritual, which begins in the nearby holy city of Mecca — birthplace of Islam and its seventh-century prophet Muhammad — is a spiritual journey that, according to Islamic teachings, cleanses the soul and wipes away sins.

"It is the seventh time I perform the hajj. The seventh time to witness this scene and I hope I can come again and again until I die," said Fawwaz Adeola, 31, from Nigeria.

Praying at Arafat, about 12 miles southwest of Mecca, is the main ritual of the five-day hajj. The time Muslims spend praying here is believed to symbolize the day of judgment, when Islam says every person will stand before God and answer for his deeds.

Muhammad delivered his last sermon at Arafat in March of 632, three months before he died. Muslims believe that during this sermon, the last passage of their holy book, the Quran, was revealed to Muhammad.

Hundreds of police and security troops were deployed Monday, keeping pilgrims away from traffic and using bullhorns to bark orders.

About 500,000 pilgrims from inside Saudi Arabia joined about 1.5 million foreigners in this year's hajj, which is taking place under tight security because of fears of demonstrations against a possible U.S.-led war in Iraq to topple President Saddam Hussein.

Anti-U.S. sentiment is running high in the Muslim world because of the threat of war against Iraq and American support of Israel against the Palestinians. Many pilgrims expressed anger or dismay at what they see as campaigns against their faith.

"Islam calls for peace and coexistence among people, it does not call for war," said Mohammed, a Nigerian who did not want to give his full name.

"I hope that God destroys America for its support of the Israelis against the Palestinians," said Najmuddin, a pilgrim from Afghanistan, where men often use only one name.

The Bush administration's charges against Saddam actually involve the Hajj.

Among the alleged examples of Baghdad manipulating religion for political and propaganda purposes, the White House claims Saddam has refused to cooperate on measures to allow Iraqis to make the Hajj pilgrimage.

From Arafat, the pilgrims will move to nearby Muzdalifah, where they collect pebbles to throw at three pillars, symbolically stoning the temptations of the devil.

Then, pilgrims and Muslims around the world, celebrate the start of Eid al-Adha, or the feast of sacrifice, by slaughtering an animal and sharing the meat with the poor.