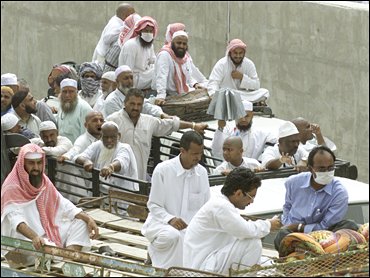 More than 2 million Muslims were wrapping up their rituals at the annual pilgrimage Thursday and began packing to leave Mecca under the watchful eyes of thousands of security forces.

The pilgrims, in waves of tens of thousands, threw seven small pebbles at three gray stone pillars amid chants of "Allahu akbar," or "God is great," symbolically rejecting the devil's earthly temptations.

Thursday's ritual, which also was performed over the previous two days, proceeded without incident. On Tuesday, 14 pilgrims were trampled to death as a result of overcrowding; 15 sustained minor injuries.

Around the pillars, dozens of security personnel stood in circles to divide the pilgrims into orderly waves, while hundreds of policemen encouraged the faithful to leave the site as soon as they were finished.

"No serious accidents have been reported so far," Brig. Saeed al-Qahtani told Saudi television in a live interview Thursday. "But our forces will remain on high alert until the end of the rituals."

Pilgrims are expected to pay a farewell visit to the Grand Mosque in Mecca before leaving. Some also will visit Medina, where Muhammad is buried, before heading home.

"I feel more worried and responsible after completing the hajj. God has washed away all my sins and I don't want to commit any more sins — and that is a grave responsibility," said Tarek Abdul Moati, an Egyptian.

About 1,000 Iranian pilgrims held a peaceful protest in the tent city of Mina, shouting "death to America, death to Israel."

"America has been targeting Muslim states for many years, and it is supporting Israel, which is killing the Palestinian people," said Hasan Ahmadi, leader of the protesters. "After Sept. 11, America blamed what they called Muslim extremists. They just want to label Islam with terrorism. Those who carried out the attacks are not Muslims and do not belong to Islam because Islam is against terrorism."

In their annual message to pilgrims on Wednesday, Saudi King Fahd and Crown Prince Abdullah said Islam has warned against terrorism.

"Terrorism means causing havoc on earth and is an aggression against others. We adopt our position based on the Quran and its verses," they said in a statement a day after an audiotape emerged purportedly by Osama bin Laden calling on Muslims to help defend Iraq against U.S. attack.

Most pilgrims, preoccupied with performing the hajj, did not hear the al-Jazeera satellite station's broadcast of the tape. But many pilgrims dismissed any advice from the al Qaeda leader.

U.S. and British officials have warned that intelligence suggests al Qaeda may be planning to strike around the end of the hajj, perhaps with a "dirty" radiation bomb.

Able-bodied Muslims are required to perform the hajj at least once if they can afford it. It is one of the five pillars of the Islamic religion; the others are declaring one's faith, praying, fasting and aiding the poor.

The rituals that began in the nearby holy city of Mecca — birthplace of Islam and its seventh-century prophet, Muhammad — comprise a spiritual journey that, according to Islamic teachings, cleanses the soul and wipes away sins.

The Mina ritual has been the source of tragic events in the past. In 2001, 35 people died in a stampede there. In 1998, 180 died performing the same ritual. A year earlier, more than 340 people died in a fire that ripped through pilgrims' tents in Mina.

"One has to exercise caution when one comes to perform the stoning ritual. But I was not afraid at all," said Mahmoud Abou al-Fotouh, an Egyptian.