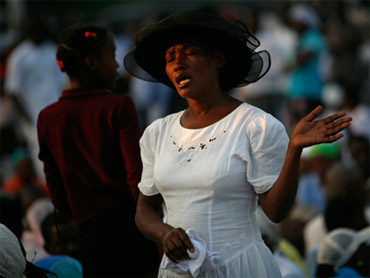 Atop the rubble of destroyed churches, in parks and on sidewalks, thousands of Haitians prayed Friday in a national day of mourning, one month after a magnitude-7 earthquake killed more than 200,000 and left this Caribbean country struggling for survival.

Leaders of Haiti's two official religions - a Catholic bishop and the head of the Voodoo priests - joined Protestant ministers for a prayer service in the shade of mimosa trees near the shattered National Palace. A Muslim preacher also attended.

Men wore black armbands of mourning, girls frilly white dresses. Among them were earthquake amputees in wheelchairs, casts and hobbling on crutches.

President Rene Preval wept during the service, his black-clad wife trying to console him.

"The pain is too heavy - words cannot describe it," Preval said in one of the first major public addresses he has made in weeks.

Haiti Earthquake - Latest Coverage
Haiti Relief: How You Can Help

Preval said he was there as a father - not the president - but urged people to keep supporting the government. He made no mention of the many small demonstrations this week demanding that he resign.

Parishioners filled churches in Port-au-Prince's Petionville suburb and set up loudspeakers so those in the streets could follow. Others stood on debris that used to be a Catholic Church and an evangelical church to remember victims anonymously buried in mass graves outside the devastated capital, Port-au-Prince.

People raised their hands to the heavens as they sang. Hymns and gospel music pumped throughout the city's apocalyptic landscape of flattened concrete and buildings uprooted at strange angles from their foundations.

"All families were affected by this tragedy and we are celebrating the memory of the people we lost," said one mourner, Desire Joseph Dorsaintvil.

Those killed in the Jan. 12 quake included church leaders, missionaries and children studying at faith-based schools. The Roman Catholic archbishop of Port-au-Prince, Joseph Serge Miot, was among those who perished.

Many Port-au-Prince church landmarks were destroyed, including the Roman Catholic Cathedral; the Catholic Church of the Sacred Heart, Haiti's oldest, and the iconic Episcopalian Church of the Holy Trinity, with its murals of a black Christ, black Virgin Mary and black disciples painted by great Haitian artists in the 1950s. Only part of a mural depicting the baptism of Christ, by Castera Bazile.

More than 1 million people have been left homeless, with aid agencies rushing to provide shelter before the rains come.

Some Haitians have been asking if God has abandoned their country, the world's first black republic, founded in 1804 following a slave rebellion. But one Catholic leader blamed nature.

"Nature may be hostile to man, but God will not leave us alone," Monsignor Joseph Lafontant said.

At the morning service Friday, chief Voodoo priest Max Beauvoir told the congregation the earthquake was a time to unify all faiths. He praised those who lost their lives and, referring to the Voodoo belief in reincarnation, declared: "People never die, souls never die."

A woman sang a song honoring the snake spirit, Dambala, which represents rebirth.

Since the quake, some Voodoo followers have converted to Christianity, some enticed by steady aid flows through evangelical missions, others out of a fear of God.

"The earthquake scared me," said Veronique Malot, a 24-year-old who joined an evangelical church two weeks ago when she found herself living in one of the city's many outdoor camps. "Voodoo has been in my family but the government isn't helping us. The only people giving aid are the Christian churches."

Voodoo evolved in the 17th century when the French brought slaves to Haiti from West Africa. Slaves forced to practice Catholicism remained loyal to their African spirits in secret by adopting Catholic saints to coincide with African spirits. Today, many practice both religions in tandem.

Since the quake, Scientologists, Mormons, Baptists, Catholics, Jehovah's Witnesses and other missionaries have flocked to Haiti in droves - feeding the homeless, treating the injured and preaching the Gospel in squalid camps where some 1 million people now live.

In many of them, trucks with loudspeakers blast evangelical music while missionaries talk to families under tarps.

The U.S. Agency for International Development channels hundreds of millions of dollars in overseas aid each year through faith-based groups, though there is no definitive tally of how much of the aid for Haiti comes through Christian groups.

In a sign of a return to normality, meanwhile, officials announced that commercial passenger flights would resume at Haiti's international airport on Feb. 19, including American Airlines flights from Port-au-Prince to Miami and New York. Small commercial planes have been operating between neighboring Dominican Republic and Port-au-Prince's small national airport.

The speaker of the U.S. House of Representatives, Nancy Pelosi, was to meet Preval, U.S. and U.N. military and other aid workers and visit aid distribution sites and medical facilities during a half-day visit Friday to Port-au-Prince, leading a bipartisan and bicameral delegation.

Pelosi, a Democrat from California, said in a statement they would "demonstrate the ongoing American commitment to the Haitian people - that they will not be forsaken or forgotten."