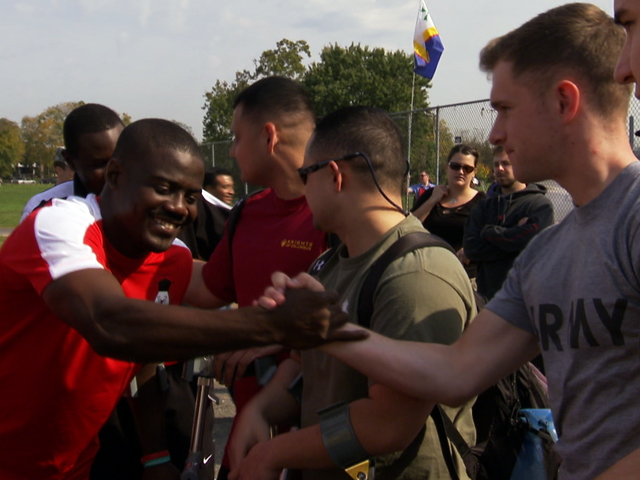 WASHINGTON - Team Zaryen, the Haitian all-amputee soccer team, traveled to Washington, D.C. recently to both teach and say thank you to the Americans who were there in their hour of need.

"I come here to say thank you for all the help they bring to Haiti," Wilfrid Macena told CBS News correspondent Byron Pitts. When an earthquake ripped Haiti apart on January 12th, 2010, Macena was pinned beneath a concrete slab. An American volunteer saved his life, and drove him four hours to the Dominican Republic for surgery.

For months, the U.S. military provided aid, security and dignity to people who struggled to maintain what mother nature had not destroyed. For Macena and his teammates, the trip was a modest payback and his first visit to the United States.

So, who would the Haitian amputee soccer team play here? It turns out these guys - American service members who were injured in war. For wounded soldiers like Army Lt. Cameron Kerr, the soccer clinic was one step closer to recovery.

"It's definetly a challenge to relearn a different way of playing soccer," Kerr said. "Emotionally, it's great. Being able to see that we can get back into this stuff. It's motivating, it's inspiring, it's everything. "

Kerr, part of the 101st Airborne, lost his leg in Afghanistan on February 16th, 2011. He describes the day as his "Alive day, because it's the day we didn't die. The whole day was pretty uneventful until we got to the objective. I heard a pop to my west. My partner, he had stepped on an IED. I started going over to him, and that's when I stepped on my IED."

The medic stabilized Kerr and his partner before Medevacing them to Bagram Air base. He's been at Walter Reed for recovery and rehab ever since. Playing with the Haitian amputee soccer team is part of that journey.

Kerr never thought his world would intersect with Haiti's. "I never expected to be able to meet any victims of the earthquake or let alone play soccer with them," he said. "I mean it's an opportunity that you'd be a fool to pass up."

The wounds of a man made by war are not so different from those inflicted in a natural disaster. They're all survivors, looking for ways to reclaim their lives.