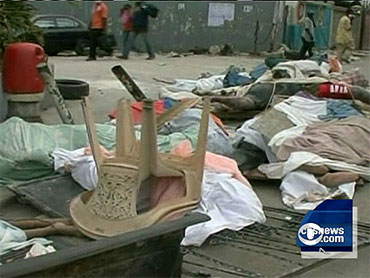 "Where we are, the cavalry has not arrived," reports CBS News correspondent Jeff Glor from Haiti's beleaguered capital city Friday morning, four days after a massive earthquake brought the nation to its knees.

Glor gave a harrowing account of how, in some neighborhoods, bodies of the estimated 45,000 to 50,000 victims are piled high in the streets. "No one should ever have to see this."

Desperation and lack of any sort of official presence have led Haitians in Port-au-Prince to start converging on makeshift camps - one of them on a soccer field just a couple minutes walk from the airport.

How to Help Victims
"Family Links" Web site for the Missing
Blog: The Latest Developments
Complete Coverage: Devastation in Haiti

Glor says he "can count on one hand the number of police vehicles I've seen."

At the airport, tons and tons of aid international aid is finally arriving, but logistical nightmares are making it hard to distribute to the thousands in need, and that is causing increasing resentment and anger among the homeless.

In the center of the capital, the stench from bodies beginning to rot in the sun, combined with the acrid dust still choking the air, is forcing people to cover their faces with anything available.

Click on the video player at left to watch Glor's report on "The Early Show".