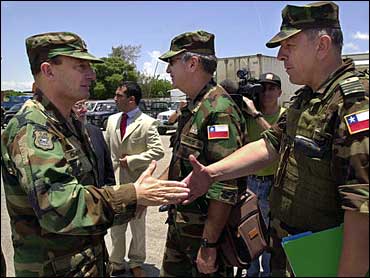 The American troops who came to Haiti to keep order after a bloody revolt ousted its president now find themselves helping out in a different crisis as they prepare to leave a nation devastated by floods.

The troops control the few helicopters that can reach inaccessible areas ravaged by floods that have killed more than 1,700 in Haiti and the Dominican Republic. In the past few days, they have airlifted more than 100,000 pounds of food and drinking water and evacuated the injured from submerged towns like Mapou.

But the Americans symbolically hand over the operation to a United Nations force Tuesday, even though only a fraction of the planned 8,000 troops and police are here yet.

Most of the 1,900 U.S. troops will stay until the end of June, but what happens after that is an open question. The U.N. forces haven't brought helicopters needed to help flood victims, and Haitians will need all the help they can get.

"On the one hand, we'll leave with a sense of accomplishment," said U.S. Marine Lt. Col. Dave Lapan, spokesman for the U.S.-led multinational task force that was sent to secure and stabilize the nation. "On the other hand, there's so much this place needs."

Most Marines arrived three months ago, in the days following the Feb. 29 ouster of President Jean-Bertrand Aristide. The Marines had a mixed welcome, with hostility from Aristide supporters that was much different from the joyous reception they got in 1994 when they invaded to restore Aristide after a 1991 coup.

Then, nearly a week ago, the floods and mudslides brought on by three days of heavy rain wiped out entire villages in Haiti's southeast corner around a farming community called Mapou. More than 1,700 people were killed in Haiti and the Dominican Republic, and the Red Cross estimates 1,500 are missing around Mapou alone.

The troops' flood relief efforts have muted much of the initial criticism levied from the Aristide crisis. Hurrying to help people in submerged villages, the U.S. troops control the few available helicopters and have become key to getting aid to inaccessible areas. In the past few days, they have airlifted more than 100,000 pounds of food and drinking water and evacuated the injured.

In addition, troops have cleared mini-mountains of garbage, refurbished slum schools, donated notebooks and pencils and even played soccer with street gangs loyal to Aristide.

Proponents of that view point to the need for a stable, economically viable Haiti to discourage boat people and to fight drug traffickers who have made Haiti a major conduit for Colombian cocaine bound for the United States.

Meek, who represents the U.S. constituency with the largest Haitian population, called a planned $50,000 in U.S. disaster aid "a pittance and wholly inadequate to properly respond to one of the worst natural disasters in Caribbean history."

The U.S. Marines led a force of 3,600 including French, Canadian and Chilean troops in a mission where it's clear that with more time they could do more. Despite a lull in the violence, Haitian factions on all sides remain armed.

The rainy season begins Tuesday and more natural disasters also threaten. A team from the International Committee of the Red Cross spotted dams near three villages that appear likely to burst if pressured with more rain, said spokesman Bernard Barrette.

Desperate Mapou survivors have been stealing food aid from each other. As military helicopters swooped down every 10 minutes with more aid Sunday, some 1,000 Haitians stood waiting in the 90-degree heat.

The mayor of the southern Haitian town of Grand Gosier said many needy people remain out of reach. Neddy Rabel, the mayor, said he helped bury 103 people in Grand Gosier and another 176 in nearby Kadidier last week. Some 100 people are missing and presumed dead and that would raise the official death toll to more than 1,700.

"People have been hiding in corn fields and jumping each other at night to get rice and other food," said U.S. Marine Cpl. Scott Rossman, 21, of Altoona, Pa. "But at the end of the day at least they have food."

With hills denuded of most trees, similar disasters threaten other towns, straining the U.N. force's original task of tending to Haiti's other daunting needs.

"We don't have the luxury of time," Lapan said. The Marines, all from Camp Lejeune, N.C., are scheduled to go to Iraq next.

"Even if we stayed here a year there are still things that tear at your heart," Lapan said. "You could spend years building schools. In a relatively short time, we've done a lot to help."