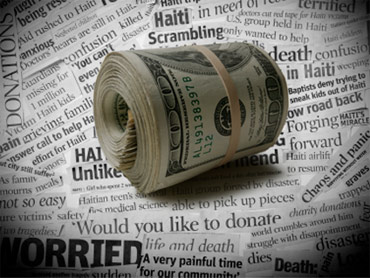 Three months after the earthquake in Haiti, many people still in need of basic emergency help.

CBS News set out to answer what seemed like a simple question: how much has been spent on and promised to Haiti?

The answer didn't exist in one place.

So we compiled the best figures available to come up with a total.

Here's what we came up with:

Haiti's government has estimated losses from the quake to be approximately $8 billion. Economists and world bodies have estimated the cost of rebuilding at between $8 billion and $14 billion.

The $14.9 billion donated so far works out to nearly $10,000 for each of the estimated 1.5 million Haitians left homeless and displaced by the disaster. On average, workers there earn just $4 a day. The funding includes emergency aid as well as pledges to help rebuild Haiti to a state better than it was before: new hospitals, clinics, school systems, government buildings, better sanitation and a more modern infrastructure.