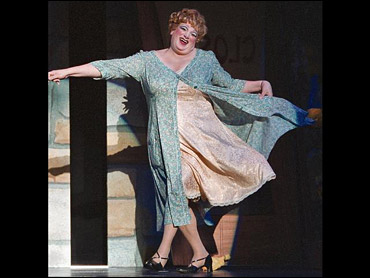 "Hairspray" was chosen best musical of the New York theater season and "Take Me Out" by Richard Greenberg was named best play in awards given Sunday by the Drama Desk, an organization of theater journalists and critics.

"Hairspray," based on the campy John Waters film about a teenager girl's obsession with a television dance show, took 10 Drama Desk honors. Its star, Harvey Fierstein, tied with Antonio Banderas of "Nine" for the leading-actor-in-a-musical award.

The top acting awards in the play category went to Vanessa Redgrave, who plays the drug-addled Mary Tyrone in the revival of "Long Day's Journey into Night" and Eddie Izzard, who portrays the father of a brain-damaged child in "A Day in the Death of Joe Egg."

Featured acting awards went to Redgrave's sister, Lynn Redgrave, for her performance in Alan Bennett's "Talking Heads," and Denis O'Hare, who plays the business manager of a gay baseball player in "Take Me Out." The featured actress-in-a-musical prize was won by Jane Krakowski of "Nine."

Chosen as the best play and musical revivals were "Long Day's Journey into Night" and "Nine."

Twyla Tharp won a Drama Desk prize for her choreography in "Movin' Out," a dance musical set against the backdrop of the Vietnam War and that uses the music of Billy Joel.

The Drama Desk, which was founded in 1949, honors Broadway and off-Broadway productions.