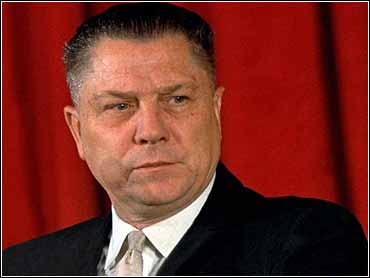 A hair from Jimmy Hoffa was reportedly discovered in a car driven by a longtime friend the day the former Teamsters boss disappeared in 1975, perhaps shedding some light on one of the nation's biggest crime mysteries.

The Detroit News reports that the strand discovery was made in the car of Charles "Chuckie" O'Brien, who had been taken in by Hoffa as a child and is believed to be one of the few people who would have persuaded him to get into a car on July 30, 1975.

Hoffa's body was never found, and his disappearance has been the subject of widespread speculation. He is presumed dead after vanishing from a Detroit-area restaurant.

O'Brien has maintained Hoffa never was in the car, and he repeatedly has denied any role in Hoffa's disappearance.

Hoffa's son, James P. Hoffa, who is now Teamsters president, expressed hope that the DNA match might provide investigators a break in the case.

"We'd always hoped there would be a deathbed confession," he said Friday at a news conference. "It hasn't happened yet. Hopefully, through DNA, we now have a breakthrough."

The younger Hoffa said he had been in contact with the FBI during the past year about the DNA evidence.

Hoffa said he had not talked to O'Brien in 26 years. But he said he confronted O'Brien shortly after his father's disappearance and asked: '"Where were you? How do you explain yourself?' His reaction was to run out of the room."

The newspaper says O'Brien couldn't be reached for comment. O'Brien's attorney, William E. Bufalino II, said his client, who lives in Boca Raton, Fla., denies any involvement in Hoffa's disappearance "as he has over the last 26 years."

"I would challenge the FBI to use all their efforts to find the rightful killer," Bufalino said. "Mr. O'Brien was contacted 26 years ago, five years ago, three weeks ago. There is nothing different that has transpired over the years."

Bufalino said the FBI indicated it is setting up a grand jury, and O'Brien - who the lawyer said has undergone two cancer operations and four heart bypasses in recent years - "will honor whatever commands they make."

Dawn Clenney, spokeswoman for the FBI's Detroit bureau, said she could not confirm the agency would call a grand jury.

James Burdick, a Michigan lawyer who represented O'Brien during the original investigation, called O'Brien a "notorious big mouth" who could not have kept such a secret.

"If (O'Brien) knew anything about it, he'd be deader than a doughnut 25 years ago," Burdick said.

On the day he vanished, Hoffa was supposed to attend a meeting at a restaurant with reputed Mafia figure Anthony Giacalone and New Jersey Teamsters boss and underworld associate Anthony Provenzano.

Neither man showed up; both said no meeting had been scheduled.

The car O'Brien was using was owned by Giacalone's sn Joe.

Investigators believe Hoffa was picked up outside the restaurant and killed.

Several weeks later, police dogs sniffed the shorts Hoffa wore the day before his disappearance and indicated Hoffa's scent was in the rear of the car.

John E. Bell Jr., agent in charge of the Detroit FBI bureau, said DNA tests were done on all the evidence, but he would not comment on the results. Federal agents have met regularly in the past 11 months to discuss the case, and decided at a meeting in November to conduct DNA tests, the newspaper says.

Federal officials said they hope to decide whether to prosecute someone in the Hoffa case no later than December 2003, according to a federal court affidavit filed in June.

In 1975, the FBI said in a memo that the disappearance was probably connected to Hoffa's attempts to regain power within the Teamsters union.

"Our theory of the case hasn't changed," Bell said.