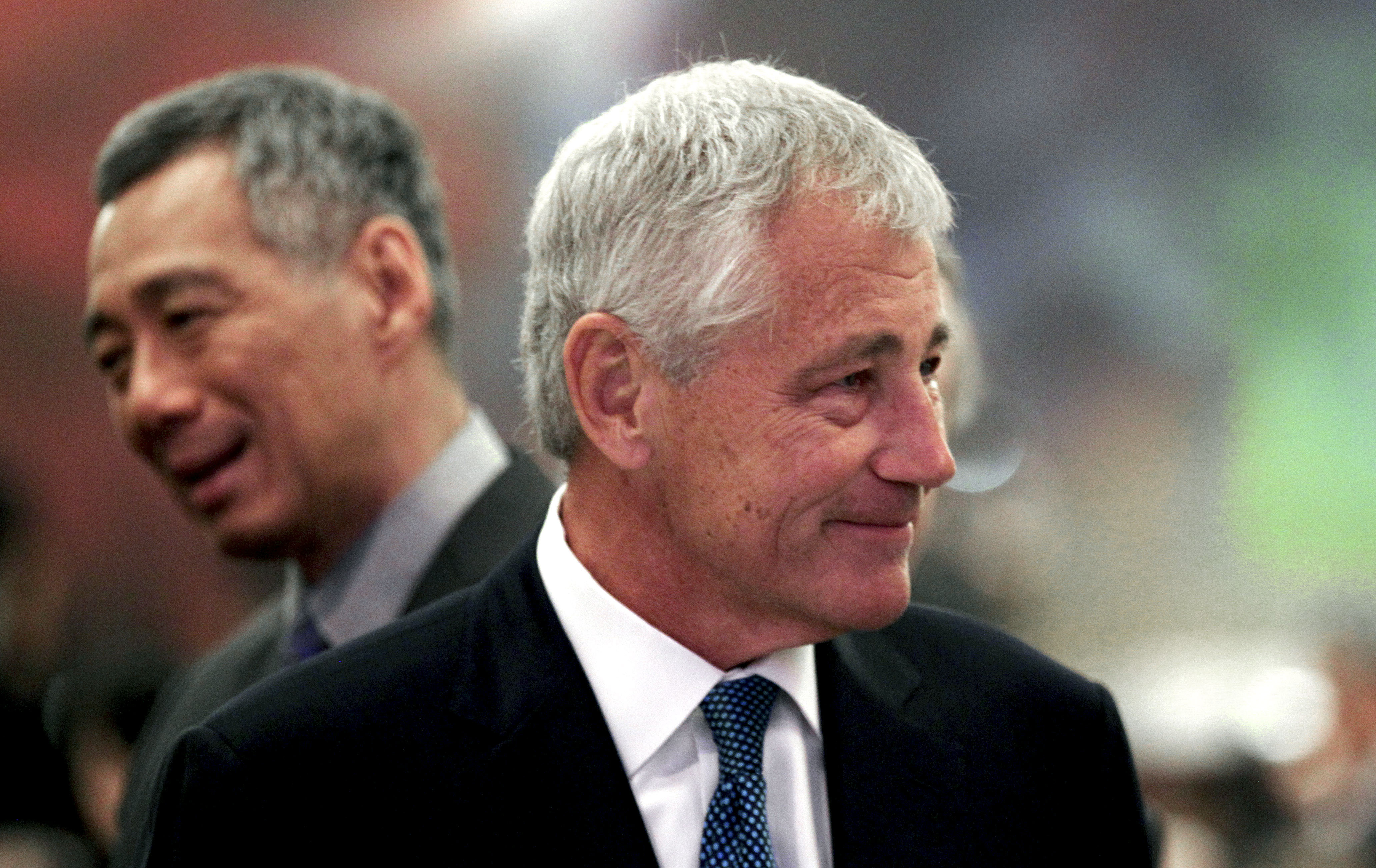 SINGAPORE Defense Secretary Chuck Hagel is delivering a two-pronged message to Beijing — holding out hope for a slowly improving military relationship while issuing a stern warning on cyberattacks.

Speaking at a security conference in Singapore Saturday that he helped to form more than a decade ago, Hagel said: "The United States has expressed our concerns about the growing threat of cyber intrusions, some of which appear to be tied to the Chinese government and military." While he is not the first U.S. official to publicly blame China for computer-based attacks that steal data from U.S. government and corporate networks, he delivered the rebuke in China's backyard, with members of Beijing's government in the audience.

The U.S., he said, is determined to work closely with China and other nations to establish appropriate standards for behavior in cyberspace. And the U.S. will also be looking to China for help in resolving ongoing problems with North Korea, which in recent months has ratcheted up tensions in the region with a series of rocket launches, an underground nuclear test and threats of nuclear strikes against the U.S. and its allies.

Noting America's longstanding tensions with China, Hagel said: "The key is for these differences to be addressed on the basis of a continuous and respectful dialogue." The two nations, he said, must build trust in order to avoid military miscalculations.

Much of the speech, however, was designed as a follow-up to last year's gathering, when then-Defense Secretary Leon Panetta first detailed what has been called the military's new pivot to the Pacific. Hagel assured Asian nations that despite sharp budget cuts, the Pentagon will continue to shift its military troops, ships and aircraft to the Pacific region. Hagel also

Where Panetta had laid out promises, Hagel was able to point to results. Marines have been deployed to the northern city of Darwin in Australia, a combat ship has arrived in Singapore and plans are unfolding for Army units that will rotate in and out of the region.

Hagel also suggested that the Pentagon's five-year budget plan continues to plan for additional F-22 Raptor fighter jets and F-35 Joint Strike Fighters in the region, along with a fourth fast-attack submarine deployed to Guam.

He provided a glimpse into the broad review he ordered to determine whether budget cuts will force the U.S. military strategy to change — a year after Panetta unveiled it.

International leaders have been watching the deliberations in Washington closely to see what the roughly $487 billion in automatic spending cuts over the next 10 years will mean to America's commitment's abroad. Already the military services have curtailed flight and combat training for many units, grounded some Air Force squadrons and delayed or canceled some ship deployments.

The Pentagon has also announced it will furlough about 680,000 civilian employees for up to 11 days through the end of the fiscal year.

The initial report on the strategy review was due to Hagel on Friday, and while he said the outcome is not final, it should reflect the rise of Asia.

"For the region, this means I can assure you that coming out of this review, the United States will continue to implement the rebalance and prioritize our posture, activities and investments in Asia-Pacific," he said.

The Asia-Pacific, said Hagel, is at the epicenter of historic changes around the world and the U.S. is committed to strengthening its military, economic and diplomatic partnerships with nations across the region. As part of that he noted that the U.S. will set aside $100 million to expand its military exercises in the region.

Just finishing his third month as Pentagon Chief, Hagel used the speech to introduce himself on a more personal level to the audience. For many he is a familiar face, since he was one of the founders of the conference in 2002, and as a U.S. senator, was a speaker at the first three gatherings.

He talked about his long ties to the region, including his father's service in World War II flying B-25 bombers in the South Pacific, and his own service in Vietnam with his brother. Hagel was wounded and twice received the Purple Heart.

Later, he traveled to Asia as the co-founder of a cellular telephone company and then, as a GOP senator from Nebraska, he served on the Foreign Relations Committee.

"What I took away from all these experiences," Hagel said, "was a firm belief that the arc of the 21st century would be shaped by events here in Asia."