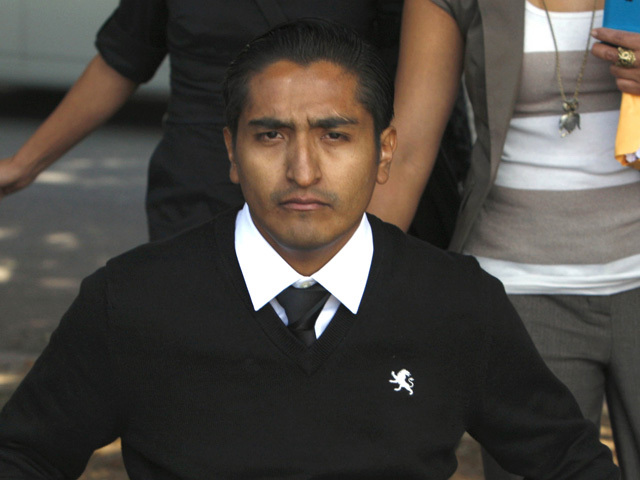 LOS ANGELES - A Southern California man was sentenced Thursday to six years in prison for infiltrating computers belonging to women and teenage girls where he found sexually explicit photos and threatening to put them online unless they provided him with more.

In sentencing Luis Mijangos, 32, of Santa Ana, U.S. District Judge George King called the crimes a form of cyber-terrorism and warned other hackers they will meet stiff penalties for ruining people's lives.

"Society has to understand that if you engage in this type of behavior, it's no joke," King said. "You are going to jail and going to jail for a long time."

Mijangos, who pleaded guilty to one count each of computer hacking and wiretapping in March, grimaced when King handed down the sentence. Tears began to well in his eyes. Earlier, he apologized for what he had done.

"To all the victims I want to say that I'm sorry," said Mijangos, a Mexican citizen, from his wheelchair. "I'm ready to do the right thing and stay out of trouble."

Authorities said Mijangos sent malicious software disguised as popular songs or videos to his victims' computers that also were unwittingly sent by women and teenage girls to their friends and family. In all, Mijangos unlawfully accessed and could control more than 100 computers.

He read their emails, watched them through webcams without their knowledge and most damaging was his discovery of nude photos they had taken of themselves. Mijangos then threatened to post the images online unless his victims were willing to provide more racy photos or videos to him or if they went to police, according to court documents. He also posed as some of the victims' boyfriends to convince them to send him nude pictures.

Mijangos eventually followed through on his threat in at least one instance by posting naked pictures of a woman on her friend's MySpace page.

The 35-year-old woman, identified only by her initials G.M., spoke at the sentencing, describing the torment inflicted upon her by Mijangos. The woman, who works as an auditor, said Mijangos threatened to release more photos to her employer and that each time she signed onto her computer at work, he would harass and threaten her.

"He haunts me every time I use the computer," she said. "You don't have to be in jail to feel trapped."

She added she no longer trusts anyone and will not pay her bills online or have conversations online.

Prosecutors sought a seven-year prison sentence for Mijangos, while a probation report recommended a two-year term. The maximum he could have faced for the two counts he pleaded guilty to was 10 years.

King said he saw the severity and sophistication of Mijangos's "personal crime wave" and the fact that the defendant decided to funnel his talents as a computer programmer to get sexually explicit material for his personal gratification.

"A lot of people suffered and suffered greatly in a real sense because of his actions," King said.

In arguing for leniency, deputy federal public defender Firdaus Dordi said his client wasn't the one who created the photos nor the virus that infected the computers.

Dordi also pointed out the medical condition of Mijangos, a paraplegic who was struck during a drive-by shooting when he was a teen. The gunman was never caught, Dordi said.