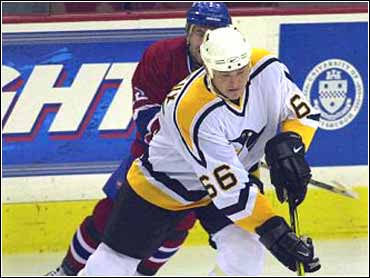 The Pittsburgh Penguins won't go undefeated with Mario Lemieux in the lineup after all.

Lemieux scored a goal for the fourth consecutive game since ending his retirement, only to be upstaged by infrequent scorer Eric Weinrich in Montreal's 4-3 victory over the Pittsburgh Penguins on Friday night.

Weinrich scored twice he has three of his four goals against Pittsburgh and Brian Savage had a goal and two assists as the Canadiens ended the Penguins' season-high four-game winning streak.

Lemieux had a goal and two assists in his fourth consecutive multiple-point game, giving him four goals and eight assists since ending his 3 1/2-year retirement.

"If you bow down in front of him, like a god, it's not going to work," Weinrich said. "He is the best thing to happen to the game, but you have to hit him and stay in his face. The only thing you try to do is keep it clean."

Montreal had won only 11 times in 40 games before opening leads of 2-0 and 4-1, both times on Weinrich goals, and dealing the Penguins their first loss since Lemieux returned Dec. 27.

"There are no guarantees in this league," Lemieux said of the Penguins, who had beaten Toronto, Ottawa and Washington at home in succession only to lose to Montreal.

The Penguins, 1-13-3-1 when trailing after two periods, tried to rally as Lemieux scored at 4:56 of the third before setting up Martin Straka's power-play goal on a one-timer from the blue line at 12:38.

But the Canadiens held on to win for just the third time in 12 games, limiting the previously unstoppable Jan Hrdina-Lemieux-Jaromir Jagr line to Lemieux's goal, although Lemieux also assisted on two power-play goals.

"All their lines, even the fourth line with (Rene) Corbet, they had chances," Canadiens goaltender Jose Theodore said. "You're not going to beat this team 2-1. You had better score three or four goals to beat them."

The Canadiens effectively slowed the Penguins' top line by frequently collapsing their five skaters around the net, sometimes leaving defenseman Ian Moran unguarded at the right point, and forcing Jagr and Lemieux to pass and shoot through traffic.

"We started a little too late, we came back but we ran out of time," Lemieux said. "That's the way they play. They've been playing the (neutral zone) trap for 100 years, and they know their system."

The Hrdina-Lemieux-Jagr line was a plus-17 in its first three games together, but Hrdina was held scoreless and Jagr got his only point by assisting on Lemieux's tap-in goal. Lemieux and Jagr were a minus-one and Hrdina was even.

"It's huge to beat them," Weinrich said. "Their top two lines are probably the best two lines in the league right now and, for the most part, we shut them down."

Savage put Montreal ahead to stay 2:51 into the game on a power-play goal resulting from Bob Boughner's boarding penalty, and Weinrich followed at 6:27 with the first of his two goals.

Weinrich, a defenseman, hadn't scored a goal since Dec. 16 against Pittsburgh. His only other goal this season was Oct. 24 against Minnesota.

Alexei Kovalev powered a shot from the right circle past Theodore at 7:01 of the first on a power play, cutting the Canadiens' lead to 2-1. But Montreal's Jim Campbell scored the only goal of the second period, also on a power play, on a wraparound that eluded goalie Garth Snow at 1:10.