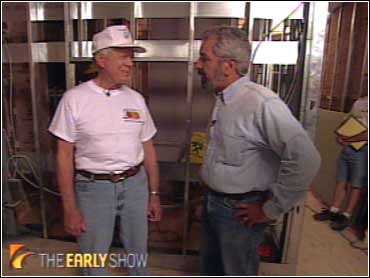 Ever since 1976, Habitat for Humanity has been providing homes for people in need. The volunteer group is in Harlem, New York, this week marking a major milestone: the completion of the group's 100,000th home.

All week long, 150 volunteers have been working on a 10-apartment building, including the people who will be living in the units, reports CBS News Contributor Bob Vila.

The building dates back to the early 1900s and it was part of the fabric of Harlem for many, many decades. But by the late 1900s, the place had fallen into disrepair when a fire had destroyed it. The damage to the roof made it uninhabitable.

Now the brownstone trim, the brick, and the windows have been neatly put together.

Plumbing, gas and electrical work are put in by professionals. But the volunteers put in the insulation, the studs, drywall, and other work.

Habitat for Humanity aims to build not just apartment buildings but community.

President Jimmy Carter and his wife Rosalyn have helped build 18 homes for the non-profit group. Currently, Habitat For Humanity is working on ten units in New York City.

"It's a partnership because we don't do any charity for these folks." He said the people who will be living in the home have put in hundreds of hours working on their house and pay full price for the house. The average monthly payment for a Habitat for Humanity mortgage is $600.

Colin Baynes, who will be living in the house with his wife Mercedes and son, has been working on the house for four months.

"It means a lot of hard work, a lot of effort put in by a lot of volunteers and it's just been great for me and my wife," said Baynes. "Basically we enjoy the work. We enjoy the sweat equity that we're putting in and I've learned a lot of new skills here, believe it or not."