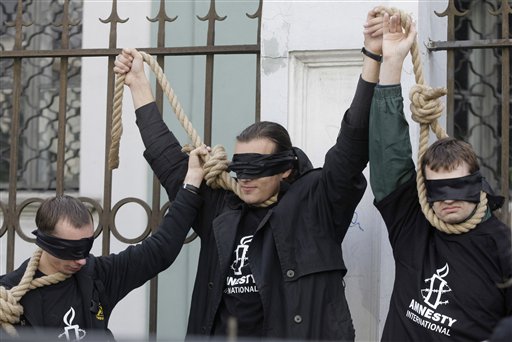 His last hopes fading, a 30-year-old illiterate Gypsy laborer whose lawyers say was tortured into confessing to murder awaits his unannounced appointment with the executioner.

With all appeals exhausted and pleas for mercy from rights activists and European officials unheeded, Vasily Yusepchuk is to be killed Soviet-style _ with a bullet in the back of the head. The time and place is a state secret, and if he is executed his family will never be told when he died or where his body is buried.

Belarus President Alexander Lukashenko let the deadline pass Tuesday for appeals against Yusepchuk's death sentence despite pleas both from within the country and abroad, at a time when the authoritarian leader is trying to woo Europe to counterbalance to Russia's influence here.

Belarus is the only country left in Europe that still conducts executions, according to Amnesty International. Under pressure from the West, Belarus has gradually reduced the number of executions in recent years.

But so far Lukashenko has resisted calls to abandon capital punishment in Belarus, where rights activists say more than 400 people have been put to death since the country became independent in 1991.

Yusepchuk was convicted in June for robbing and murdering six elderly women over the past two years, although his lawyers argue the case against him was fundamentally flawed.

Foes of Belarus' death penalty point out that former Judge Yuri Sushkov, who sought asylum in Germany in 1999, has claimed judges were pressed to sentence people to death without adequate evidence, and that suspects were tortured into making false confessions.

"We are deeply concerned that Vasily Yusepchuk... may face imminent execution after the Belarus Supreme Court has rejected his appeal against the death penalty," said a statement Monday from the 47-nation Council of Europe.

"We appeal to President Alexander Lukashenko to grant clemency to Mr. Yusepchuk, to declare forthwith a moratorium on the use of the death penalty in Belarus, and to commute the sentences of all prisoners sentenced to death to terms of imprisonment," said the statement issued by Council Secretary General Thorbjorn Jagland and two other officials.

"Is anyone at all interested in the fate of an illiterate Gypsy?" asked the 52-year-old mother of five, who earns $35 a month working on a collective farm.

Slumped sadly in her decrepit home in the village of Tatarya, rats scurrying in the corners, she said she had given up hope. She has already tied a black ribbon around a photograph of her son.

Gypsies, also called Roma, face widespread discrimination. Yusepchuk, born in the Ukraine and brought to Belarus at age 7, is not a Belarus citizen and his mother said his ethnic origin sealed his fate.

"I don't believe my son has killed anyone," she said. "They just found a defenseless illiterate Gypsy they can blame the killings on."

Investigators claim Yusepchuk, an itinerant worker who did chores for elderly women, would sneak back at night to rob and strangle them. The murders shocked the country and Yusepchuk was sentenced to death by Brest Regional Court on June 29.

"There's been a lot of talk about abolishing death penalty," said prosecutor Nikolay Zhechko. "Perhaps, it will happen one day, but in this case the sentence completely conforms with the crime."

"I can't say anything good about Vasily," she said. "He stole hens and geese from his neighbors. One could expect anything from him, including a murder."

In 2008, Belarus executed four people. So far this year, only two have been put to death. But Lukashenko, who has pardoned just one person after 15 years in office, has resisted suspending or abolishig executions.

He held a referendum on capital punishment in 1996: 80 percent of Belorusians supported it.

"Of course, the death penalty is necessary," said Dmitry Kishkovich, a 45-year old worker. "We need it so that criminals are scared and know what they can get."

But Yusepchuk's lawyers insist their client was wrongly convicted, claiming the case hinged exclusively on a confession that they claim was obtained through torture.

"Medical experts have documented the beatings," invalidating Yusepchuk's admission of guilt, said Igor Rabtsevich, one of the condemned man's lawyers. "How can one kill a man when there are so many questions about the case?"

Amnesty International says Yusepchuk reported being beaten twice, in January and March, while in pretrial detention. The group has appealed to Lukashenko, and Yusepchuk's lawyers and others have asked the United Nations Human Rights Committee in Geneva to intervene.

"Yusepchuk is illiterate and does not even know the names of the months of the year," said Valentin Stefanovich, a Belarus human rights advocate. "Under torture, he could have confessed to anything, without realizing the consequences."

Critics say Belarus' execution method is a brutal legacy of the Soviet era. Oleg Alkayev, a former head of an Interior Ministry execution team who emigrated to the West, has published a book, "The Death Squad," that caused an uproar here.

On the day of execution, the convict is transported from a pretrial cell in the Belarus capital of Minsk to a secret location, Alkayev describes. There, police officials tell the convict that all appeals have been rejected. He is not allowed to see a priest.

"The convict, who is on the verge of complete madness at this point, turns into an obedient, submissive creature who doesn't understand what's going on," said Alkayev, who said he supervised 134 executions over a period of five years.

The convict is blindfolded and taken to a nearby room, where the executioner waits with a Soviet PB-9 pistol equipped with a silencer. Two staffers force the convict to kneel in front of a "bullet-catching" shield, and the executioner shoots him in the back of his head. A doctor then confirms the convict's death.

"The whole procedure, starting with the announcement about denied appeals and ending with the gunshot, lasts no longer than two minutes," Alkayev said.

The body is then wrapped in a plastic bag and buried in an unmarked grave at a secret cemetery. The relatives are never told where.

"These Soviet instructions hurt innocent relatives who can't bury their kin and suffer from this meaningless and inhuman secrecy," said Stefanovich, the human rights activist.