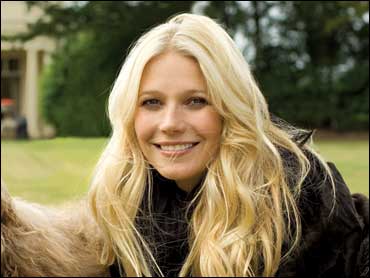 Anyone who thinks Gwyneth Paltrow is perfect, should think again.

"They should see the cellulite on my thighs right now," the actress says in the new issue of Harper's Bazaar.

"With Apple (her 2-year-old daughter) I kept the extra 20 pounds on until she was 3 months old, and then it came off. And that's exactly what's happening now," says the Oscar-winner. Paltrow, whose second child, son Moses, was born in April, says she is exercising "but not dieting, because I am a milk machine!"

The actress says she gained 40 pounds with each of her pregnancies, losing 20 of them after childbirth.

The mother of two and wife of Coldplay frontman Chris Martin, Paltrow says she's been on hiatus from acting for more than two years and has enjoyed every minute of it. She spends many a day in her garden, in sweatpants, with her children. Motherhood, she says, "it's so incredible and rewarding, a total joy."

But she admits that pregnancy and dealing with the subsequent baby bulge is tough.

"The first time (you are pregnant), you are horrified," she says. "It's all lovely when you are pregnant; but when you are not pregnant and you haven't been for a couple of months and you are still carrying tons of extra weight and everything's all hanging and sagging, you think, How is this ever going to go back? But it does. If you do a lot of working out."

What are her beauty secrets? "Drink tons of water, and wear sunscreen. And I really do think that if you eat fresh, organic, good food, you look like it."

2
As for her flowing locks, Paltrow chalks it up to vitamins. "Take New Chapter Organics' Perfect Prenatal. It doesn't matter if you are pregnant, I swear to God," she says. "I have double-processed blond hair, and it's so long and not damaged. Those vitamins, they are the trick."

Audiences will soon see Paltrow's famous face in the new film "Running With Scissors," alongside Annette Bening and in her brother Jake's directorial debut, "The Good Night."

"For a long time, I thought, 'I've done it. I've done what I wanted to do. I'm not interested. I just want to be home with my family.' I had no spark for work, but I feel the feeling back," she tells Bazaar. "And I'm excited about the prospect. I want to do something kind of fun. I don't want to do anything depressing or mad. I want to do a really great, funny, weird character."

Any new acting gigs may take her away from her family and her London abode, where the actress says they aren't hounded by paparazzi. "We have a gate and a car. It's easier to control it a bit more," she says.

"In the evening, when I've gotten them both down, I come downstairs, pour myself a glass of red wine, and sit in the garden," she says. "I love it so much. I used to have the odd cigarette at a party, but I don't do that anymore, so that vice has gone."

The September issue of Bazaar is available Aug. 22.
By Amy Bonawitz