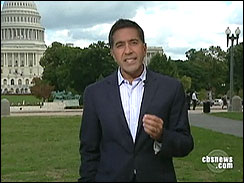 (CBS)
Our sister blog, Political Hotsheet, is pointing to an item in the Washington Post reporting that President-elect Barack Obama will announce he is tapping CNN correspondent and CBS News contributor Dr. Sanjay Gupta, a neurosurgeon, to be surgeon general. Could Dr. Gupta be heading to Washington? Brian Montopoli writes:

"Gupta has told administration officials that he wants the job, and the final vetting process is under way," reported the Post. "He has asked for a few days to figure out the financial and logistical details of moving his family from Atlanta to Washington but is expected to accept the offer."

CBS News can confirm through a source close to Dr. Gupta that the doctor was offered the position.

Read the full post and check out some of Gupta's work for CBS News here.
© 2009 CBS Interactive Inc. All Rights Reserved.