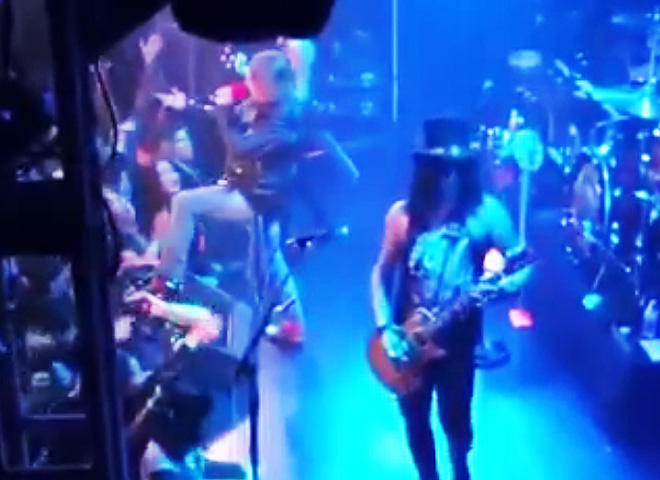 The news was music to the ears of Guns N' Roses fans: The iconic 1980s hard rock band played a surprise concert at the Troubadour nightclub in Los Angeles Friday night.

It was the first time in more than two decades that the band's original line-up -- including frontman Axl Rose and lead guitarist Slash -- have performed together.

When word broke Friday morning that Guns N' Roses was kicking off its reunion tour with an intimate show in Los Angeles, hundreds of fans lined up to get a ticket.

"This is the best day of my life," said the first guy on line. "This is going to be the coolest show ever. It's the best band ever!"

Another male fan, displaying a green wristband, said, "That is more important to me than the birth of my child."

The show marks the first time feuding bandmates Axl Rose and Saul Hudson, known as Slash, have performed together since July 1993.

"Welcome to the jungle,
We've got fun and games.
We got everything you want,
Honey, we know the names"

The world certainly knew their names when Guns N' Roses shot onto the L.A. rock scene in the '80s.

Their 1987 debut album, "Appetite for Destruction," challenged the synthetic pop sounds and heavy metal hair bands of the decade.

The group's rapid success led to tension between its stars, Slash and Rose, and in 1996 the guitarist quit the band. The two men continued performing with other musicians, and didn't talk for years.

"The conflict between Axl Rose and Slash was kind of your classic, 'Who's leading this band?'" L.A. Times music writer Mikael Wood told correspondent Carter Evans. "Slash and Axl have been pretty vocal about their disinterest in working with each other again. They've both said statements to varying degrees of 'Never, not in this lifetime.'"

But last year, on "CBS This Morning," Slash hinted that a reconciliation was possible. He said a lot of the tension had dissipated: "We don't have all those issues any more."

"Would you want a reunion?" asked Gayle King.

"If everybody wanted to do it, and do it for the right reasons, I think the fans would love it," Slash replied. "And I think it might be fun at some point to try and do that."

On Friday, they did just that, in front of fewer than 500 fans at the Troubadour. The historic moment was captured on cell phone video.

The band also announced a 20-city tour this summer, where it's estimated they will make upward of $3 million per night.